Searching around for more info than just screen spec numbers, we found our friends at Wired have stepped up with just what we need. Their article, “Apple iPad’s Display Is More Like a TV Than a Laptop” puts in plain english what the numbers and acronyms really mean to us users.
For example:

“The iPad’s display uses the same capacitive touchscreen technology as the iPhone and iPod Touch. At the same time, it offers a better picture quality than conventional LCDs.”

“So-called twisted nematic LCDs have dominated consumer laptop and phone displays. The viewing angle on these screens is limited, ranging from 110 to 120 degrees. When the screen is viewed outside this optimal range, its colors can look “off” and the overall image is faded or invisible. In-Plane Switching helps fix those problems. In IPS LCD screens, the crystal molecules are oriented so their motion is parallel to the panel, instead of perpendicular to it. For viewers, the result is a very wide viewing angle — up to 180 degrees — with brilliant color.”

“The iPad display has some other interesting features. It is arsenic- and mecury-free and has a fingerprint-resistant oleophobic coating, which Apple had introduced in the iPhone 3G S. The iPad’s 1024 x 768 display resolution, at 132 pixels per inch, has chunkier pixels than the iPhone 3G S, which has a smaller display but a resolution of 163 pixels per inch.”

Take a look at their full article here… it does a great job of painting the picture of just how nice the screen is till your able to get your hands on one in a couple months. 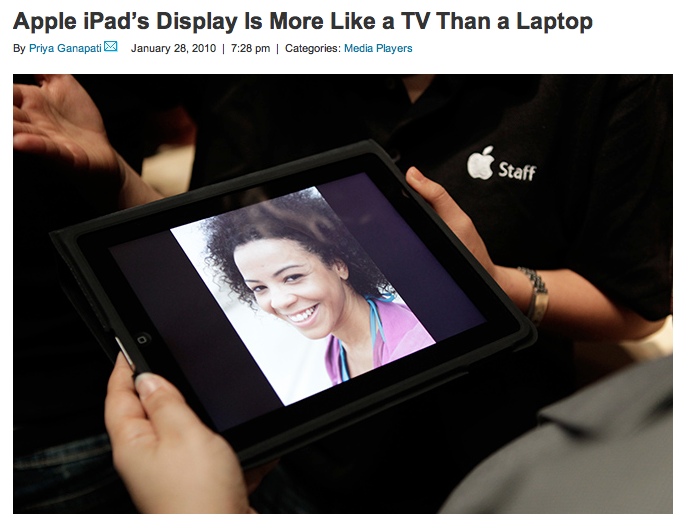