The iPad is going to market where many others have hinted to but not fully jumped in. A ‘tablet’ that isn’t built on a notebook which has a pen screen that rotates. Many manufactures have shown prototypes of ‘Pads’ that are all screen. They are usually either just a desktop OS lightened up or a device that only works when it can be connected to the Internet. A Pad with the right OS and Apps could be like their names is best known for, a Pad of paper.

In the case of the iPad, the size is right, there are many notes editing apps and you have a good size on-screen keyboard.

Wouldn’t it be handy if while carrying the iPad about the office, you could stop and write a note no the screen? The keyboard, while very nice, might be slower to use when you can’t sit the iPad on your lap or a table. Maybe, Apple will have some sort of handwriting recognition… yea, not a chance. While everyone around here where (and some still are) serious Newton users. No one has a great history of being very quick at jotting down a note on the screen and the software translating it to text correctly. Graffiti was a savior we all enjoyed using… working well for the Newton and the Palm devices. Non of us can see Apple risking the bad press again.

Graffiti would be a nice addition for the iPad. Not likely, but it would be a pleasant surprise.

Most of us carry MacBooks to meetings now, which are networked back to our desktops or other notebooks. With our notebooks, we carry pads of paper, which are great for jotting down notes or diagrams since getting data into a notebook redirects your attention from the conversation to an application. The print notes are kept, some folks scan to PDF for later reference, some folks type the notes in later when not in a meeting.

The iPad has the opportunity to be that pad of paper, and the conduit to make the notes available later as well a connection to other stored documents. If you want to keep the hand written notes in your future, there are several options currently available for the iPhone / iPod Touch.

One option is built around keeping your hand writing not he screen, either with your finger or special stylus, in that ‘ink’ look. It was created to better assist the users where their text appears on the page.

A second option is an actual hand writing recognition app that has many ways to clean up the text quickly so that time isn’t wasted by having to re-write to correct.

The first option is brought to life from Dan Bricklin – yes, they guy that got us all started with how we see numbers by inventing Visicalc has an app called Note Taker. It is built around the idea of writing notes on a 3 X 5 card. It’s strength is that the text you write is shrunk down and place on the ‘page’ where you want it in real time, a must for the iPhone size screen. For the iPad, we hope the 3 X 5 size jumps up to 8 1/2 X 11 and we keep the full size text conversion to the smaller manageable size. The notes can be organized and passed to store or share for later access or accessed by others. 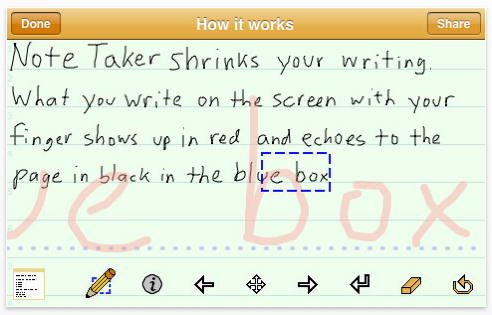 The second option, WritePad, is brought to us by the folks that wrote PhatNotes for many different platforms. There are actually many different versions of the application available by the same author for notes, pro notes, todos and calendar items. It is a true hand writing recognition solution, taking your handwriting and converting to text. Rather than spending a lot of time tuning how you write to get lettering that translates best, the software offers multiple ways to correct the text quickly as you go rather than having to come back later and try to remember what that sentence should have said. Many shorthand and shortcut strokes lessens the time to write as well… a feature not found in the pen on paper world. And finally, the software can translate your text to other languages – a cool feature with few real world usages. 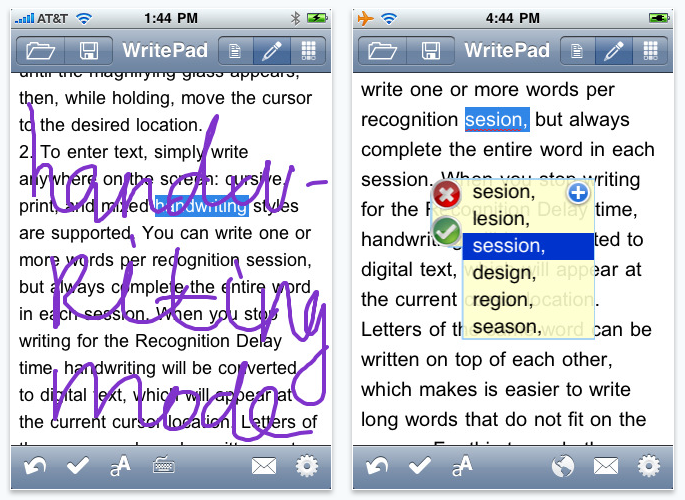 Above Screenshots are from an iPhone, we are looking forward to having more room to write our long meeting notes on the iPad.

Dan Bricklin’s Note Taker is selling for less than two dollars right now, and WritePad in it’s many versions starts at two dollars and goes up to ten. WritePad does have an additional desktop sync app to help getting your notes from your device to your desktop when on the same network.