To get the maximum out of your iPad around the office, you will want to make sure you have thought out file storage and access – we’ll cover all that soon.

Apple has thought about the Business user when they created the iPad. Apple has enhanced the user experience of using the Calendar, Mail, Notes and Photos. Additionally, a whole new way to interface with iWork, multi finger touch. The addition of pull down menus and multi tier access is a change from single page views leading to another single page – currently being seen in the Settings area.

Several items that are said to be available in the release version of the iPad in a couple months but we had no way of testing at the introduction.

-Connecting the iPad to your desktop with the USB sync cable, you will have a removable drive appear, a feature not on the iPhone but is on many of the other iPod devices. Apple has stated they will allow files to be ID’d and referenced by apps that can use those. We hope this is files stored in this area and not just those installed over networking to the desktop like the iPhone is now.

-Direct Network Printing is another near future promise. Currently there are several apps for the iPhone/iPod Touch that allow printing over a home WiFi network but they are limited to photos or text docs created within the app.. The ability to find a printer on the work network and use it for printing documents from a variety of apps.

-Finally, the ability to see drive storage for your files on a network – much like the current system uses file storage across the Internet using iDisk (WebDAV-based MobileMe). 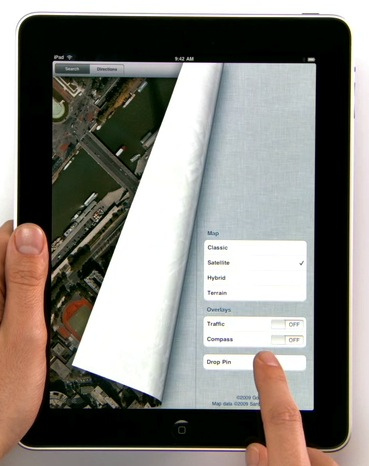 Missing and no mention of future built in capabilities is VPN or Push email from your Microsoft Exchange server. As well, no solution for pushing out (deploying) updates which as we know, IT loves to do to you. We are sure there will be a lot of pressure on Apple to open up the ability for companies to create and manage the distribution of their internal apps without connecting to the iTunes App Store.