A lot of talk has been around what changes might be happening to apps that were once written for the iPhone/Touch and will now be used on the iPad. More screen and a few different UI features. A question comes to mind about the software you have loaded on your computer that syncs to a app on your iPhone/iPad. Will those software versions need to change too?

In the case of 1Password, their latest beta version speaks to a change in their sync to handle a iPad connection. 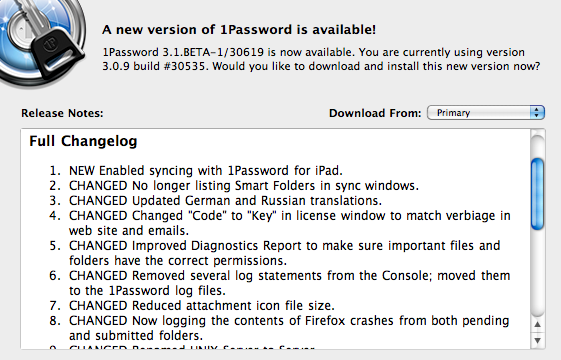 Most text editor tools on the iPhone are rather simple so their desktop software counterparts are simple too. It keeps things consistent, users do not feel like they are missing out on anything they had on the desktop and can’t do on their mobile device.

A text and graphics editor desktop solution that syncs with a iPad really should have more capabilities. There is more room to work with on the larger iPad screen so the likelihood that users will expect to be able to drag a file from a folder to another or edit documents in a ‘print’ view will start to be the norm rather than the exception. We would hope that desktop software can match capabilities across the platforms.

Now… what if a user has the app on both a iPhone and an iPad? Does the sync software have to change their usability tools or will it be acceptable to say that there will be some limitations if synced with a iPhone version of hardware vs the iPad? It is an interesting problem to be solved by individual programmers to best match the way they expect users to interact with their software.