Most computer software have a demo or trial mode that allows you to try for a while and then buy after a period of time. Those apps either expire or have many of their features crippled to encourage you to pay for them.

For Apps in the iTunes Store, developers have tried a variety of ways to ‘try before you buy’. For some apps, this is done by having a ‘lite’ version that crippled like desktop software would during the trial. The difference is that you do not update a lite version. Instead you have remove app, buy the full version and install it. Very few people complain about this but developers hate to have to put their customers through that… as well, many apps do not allow themselves to be cleanly limited to encourage the purchase of the full version.

OmniGroup have apps that are difficult to ‘lighten’. Also, their apps normally cost more than the average because they are positioned more towards a limited number of users that need the power they bring to a mobile world. OmniFocus that is a cross between a project planner and a super ToDo manager, OmniGraffle allows a user to create simple to extensive flow charts… with their finger.

The folks at OmniGroup seem to understand their customers. There are the users that will buy and drop the app right into their busy day. There are others that buy because they have heard good things or think they want the power when they actually only ‘need’ a ToDo manager.

Rather than have a few folks saying their spent the money and don’t use the apps, OmniGroup offers to give you your money back. While this is great customer service, OmniGroup really takes a hit. Apple get’s their cut of the money when you buy the app but they do not refund that 30% when you return, it’s all out of OmniGroup’s pockets. Yes, it appears to be THAT important to you being happy.

Since we would like to see more of this level of carrying, we encourage people that really want to continue using the apps, do not ask for a refund. OmniGroup is expecting a level of honest people. 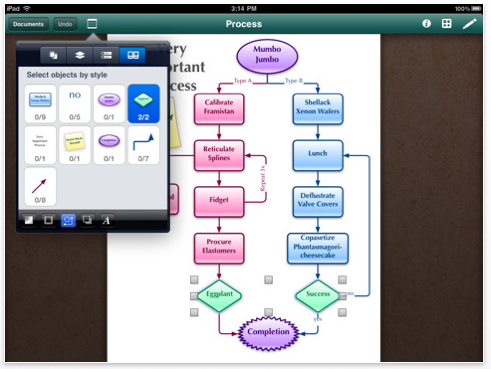