We use a few apps more than others. Outside of games and note apps, a lot of attention is given to tools we use to represent what we have in our minds. Both, in meetings with coworkers to create new ideas and workflows as well when we are with clients to work with their ideas in real time.

Two of these tools where just updated with a features we were excited about. Off to integrate them into our normal workflow…

What’s New in Version 1.0.3
New Feature & Changes:
– ALIGNMENT grid-lines and SNAP-TO functionality! Now aligning and resizing controls has become MUCH EASIER!
– LOCKING/UNLOCKING size for UI objects, this can be done from the Info panel for any selected object. Once locked, an object can be moved but not resized/stretched.
– Control Properties Popover no longer automatically appears when you create new controls. This is to allow for rapidly dropping many controls consecutively without interruption. The Control Properties Popover can be displayed by selecting a Control and then tapping on the Info button along the Top Toolbar.
– Tap a Control on the palette to quickly place a new Control on the page. This allows for rapid creation of multiple Controls consecutively by tapping on the Control’s button.
– Improved dragging Controls from the palette. You will see the control appear at your finger and you can then drag it around the page to place.
– Removed the Delete prompt when deleting Controls. Undo allows you to undelete elements so a prompt is not necessary.
– Phone and Tablet frames now maintain their aspect ratios when resized  - X, Y, width and height are now displayed while dragging or resizing controls
– Web Browser control now defaults to 1024×800 when first created 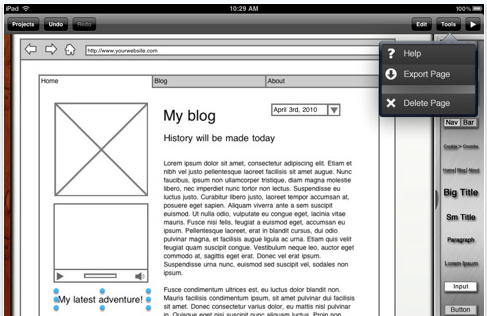 OmniGraffle:
What’s New in Version 1.1
OmniGraffle 1.1 for iPad is a significant update which focuses on improving performance, adding Multi-Touch gestures, handling existing documents, and improving the user experience.  Performance Enhancements
• Added a set of tiling scroll view classes that greatly improve performance when moving and manipulating objects and panning the view.  Multi-Touch Gestures
• Added the ability to tap and hold one object and tap other objects to add to the selection.
• Support for two-finger rotation of objects has been added.
• Two-finger double-tapping an object will zoom to fit the object in the view.
• Tapping an object while moving another will invoke temporary smart alignment guides.  Text Editing  • Improved selection when editing text.
• Improved performance with respect to displaying fonts.  File Handling
• Custom stencils downloaded via Safari on the iPad or sent via email now remain as stencil files even after editing.  File Browser
• Document previews are now closer together so that neighboring documents are always visible.
• Animations when opening, closing, duplicating and deleting documents are smoother.
• Fixed an issue where document previews were sometimes missing.
• Delete button now spawns a popover instead of an alert. 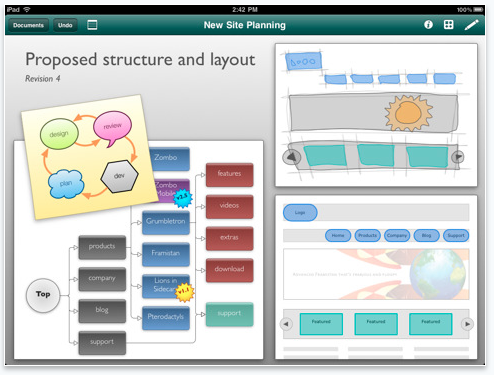