We were sitting around a desk discussing one of our fav iPad notes apps. How it had a major update and yet was missing important features… still! When it was pointed out that many notes that you need to get through the day really needs no super powers. Most day-to-day notes need to be quick entries that can be sorted, searched for and accessed from many locations. Meeting notes are long and detailed but call highlights and hallway reminders are simple and have to stay that way to be effect.

What was found to be getting used was a free universal app called SimpleNote. And, as luck would have it, it was top of mind because it was just updated.

SimpleNote is set up from day one to work via the developer’s cloud Web site offering. It too is free, you just have to sign up (either via the iPad app or through the Web site). Syncing between the iPad and app is done over the Internet so no need to connect to you computer via WiFi network or a USB cable.

As we said, the SimpleNote app is free… with ads appearing from time to time. You can ‘in app’ pay $4.99 to not see the ads anymore. Also, for $12 a year subscription, you can get rid of the ads and enjoy a bunch of additional features online. Including deeper backups of notes, pushing your notes out via RSS and adding notes via email. If your thinking about jumping into SimpleNote, you will want to look at all of the extra items that you can use to connect to other note apps, enhance the Web site interface and even automate downloads through a link in an note. 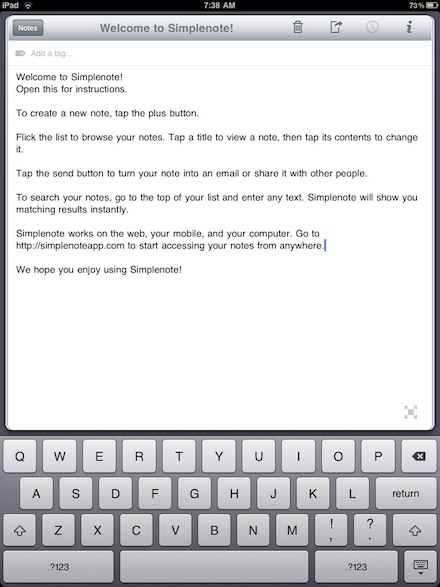 Like the Built-in notes app, SimpleNotes uses the top lines of the note as the text it shows in the list view. 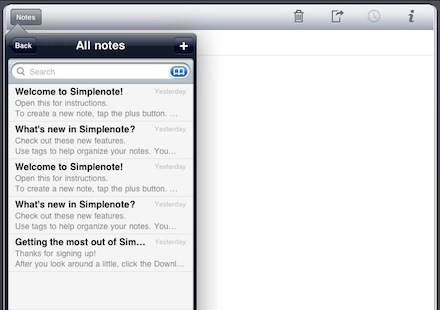 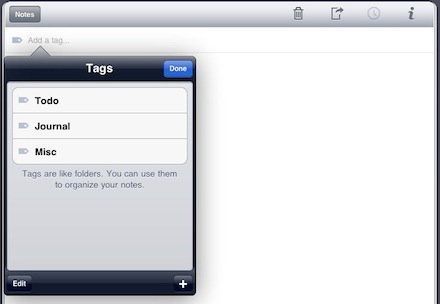 One negative we did find with Tags (a new feature) is that currently you are not able to change a tag name later. So, we are planning on using sub Tags to use till that feature appears. The new Tags feature really brings the ability to pull together documents around a conversation.

Even though the system is called SimpleNotes, you can share the text of your note in a email, publish the text to a Web site and also share a link to the text in an email.

Another pleasant surprise for a free notes app is Word and Character counts. The ‘Pin To Top’, although not a great name, works well to lock that note to the top of notes lists.

At the top of every note is a small clock. This is your roll back to an earlier version of that note. Wow, eh? For the free version, tapping the clock gives you a slider to go back 10 versions. For the Premium version, you can go back 30 versions!

The ‘settings’ area for SimpleNote is extensive and pretty self explanatory. Most important is enough features to access and share notes without getting in the way of using it for quick notes in the fast pace of the day. 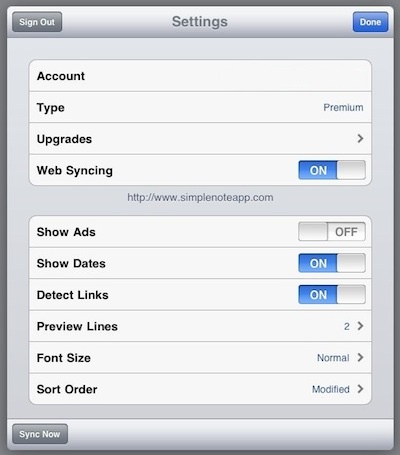