There are a lot of computers on TV shows that are just there to be a prop. More and more you see the back of a Macbook Pro or an iMac. Not a lot of these weekly shows have picked up the iPad yet. Soon you will be seeing them on murder cop shows as devices to take notes on or be always connected for looking up information.

Right now though, we are seeing the iPad show up on shows being actually used with their built in features or add on apps. Many times, when we think of new technology to be used for TV or movies, we go over the top with trying to make them do too much. Instead, their real home is just being used as an extention of what folks do on TV.

Last week, as the hurricanes approached the east coast, we saw Al Roker out on the beach. He was wrapped up in rain proof gear, hat and jacket. Being way out on the beach by the waves and the camera up safely on the hill, meant no access to TV screens. So, on his iPad, he has his notes and an app showing the hurricane path. We where watching at the same time using a variety of weather apps – The Weather Channel or Accu Weather. The camera never zoomed in so we are not sure what he was using.

This weekend, an iPad showed up again, this time Desperate Landscapes on DIY. Interviews of the neighbors talking about the house to show to the homeowners. A simple usage of the iPad but it is a natural solution. 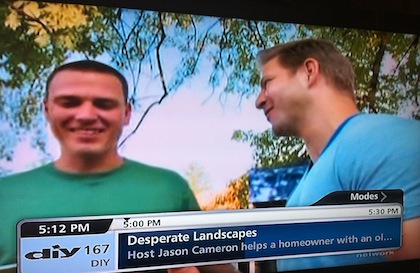 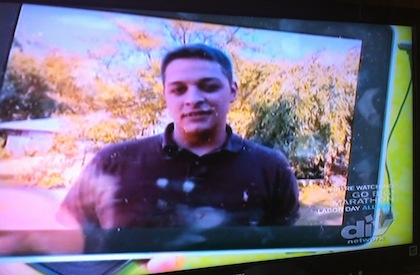 You may have noticed the cable coming our of the audio out leading to a round black device the show’s host held behind the iPad. It appears to either be a speaker so the homeowner can hear what was being said or to transmit to the camera’s audio pickup. It would make sense for it to be a external speaker since the audio out of the iPad isn’t really made to be used out by a street. 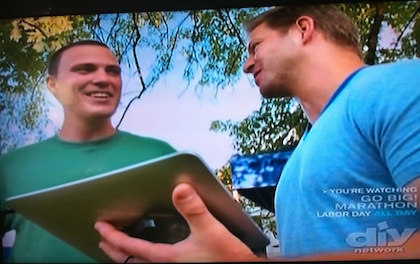