When someone sees these stands on our desks, they pick them up and turn them every which way to figure out what it is. Most often, they think it is some sort of big ‘J’… but what for.

The light bulb goes on pretty quickly when they see you start to place one on your iPad. Hint, they go on the sides, not the top or bottom. 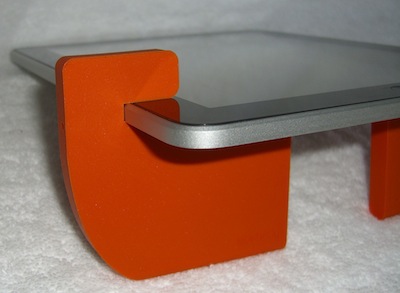 The stands are from MoviePeg. And, while their site and most review talk a lot about them being used to hold your iPad while you watch a movie, we use them mostly for getting the iPad in the right angle to use the on-screen keyboard.

The stands (available in iPad and iPhone 3x sizes) just slide over the edge of the iPad without the need of a clamp or adhesive. You use two for the iPad (sold that way) or one for the iPhone (iPhone 4 version not yet available). From the look of the plastic, you might expect that they are softer than they are. Everyone in our group ordered the limited addition ‘orange’, the default color is black. 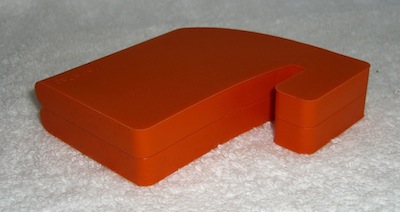 The two parts of the iPad version have a interlocking circle that keeps the two parts together when not in use: 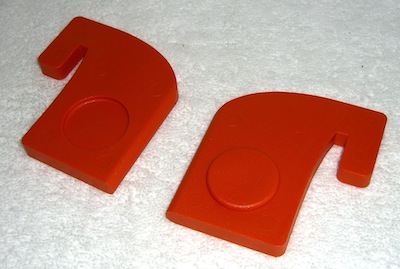 The MoviePeg can be adjusted anywhere along the edge of the iPad. Lower on the device causes the iPad to stand taller. Slide them up and the iPad lays lower. Getting the two side aligned is required to keep the iPad from wiggling a bit like a cafe table with one short leg. Since the plastic is hard, they slide easily so moving to set solid take only a second.

Watch movies, type on the screen, keep your Twitter feed or clock running… there are many angles and apps that come to mind that can be used while only having to carry this one simple ‘stand’. 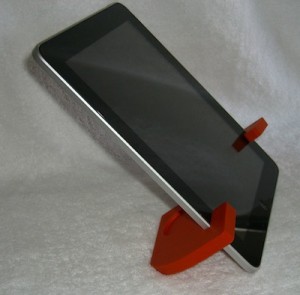 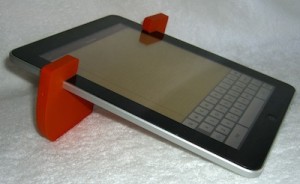 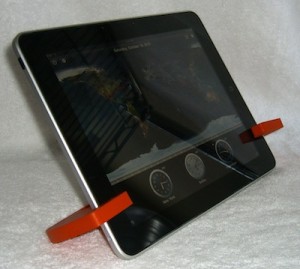 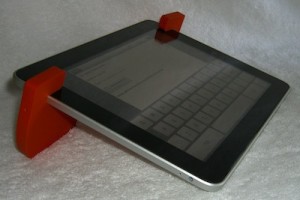 One item about such a precision cut opening to go around the edge of your iPad is that the stand works with no cases. We tried it on a iPad with even the tightest iSkin and it still didn’t go over the edge. This is the MoviePeg on the edge of an iPad in the Apple case… just for an example. 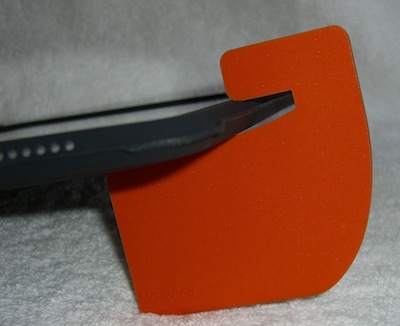