We covered a couple popular quick and easy notes apps we use on our iPads (Quick, Simple PlainText Notes That Syncs To Dropbox). These are not for high detail notes where handwriting and images need to be used. Depending on the app chosen, even these ‘keep it simple’ style of notes can be very useful since they are fast to create and easy to find later.

Of those two, Simplenote synced through the developer’s Web service for access to your notes on the iPad and Web editor. A special feature it has was the ability to ‘pin’ a note to move it to the top of the list of notes. The second quick note app was PlainText which synced through DropBox Cloud service to access the notes with other devices. It’s extra feature was the ability to create folders to put notes into.

A slight twist to both of those is the Elements notes app. It is a universal app for both the iPad and iPhone. Notes written or edited on the iPad are synced up through a folder on your DropBox acct (supports the free account version of DropBox).

Notes can be created with a variety of text styles even when not connected to DropBox, then sync later to view/edit with other devices. 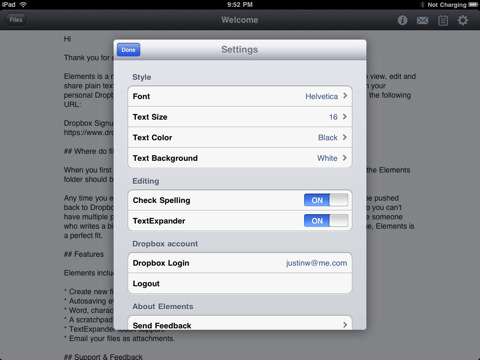 For some users, to find their notes later they divide notes into folders per type, meetings or projects. Elements keeps all of the notes at the same level. The overall list can be sorted by name or last edit date. There is also the ability to search for text within the notes. Being able to search is a big win for users that use ‘tags’ in their notes. Using a ‘@’ or ‘#’ then a word is a couple ways you can text tag a note to search and group later. 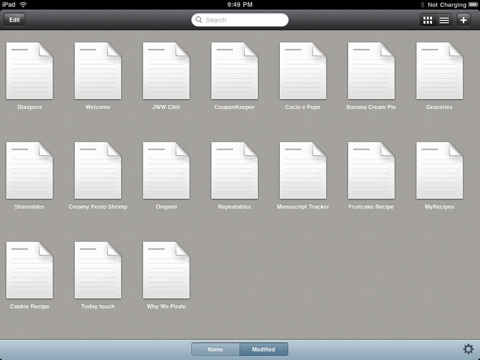 A ‘extra’ feature that Elements has is it’s Scratchpad. From any note you can tap the icon and add quick text. Handy to get a quick idea written down while working on a note on a different subject. 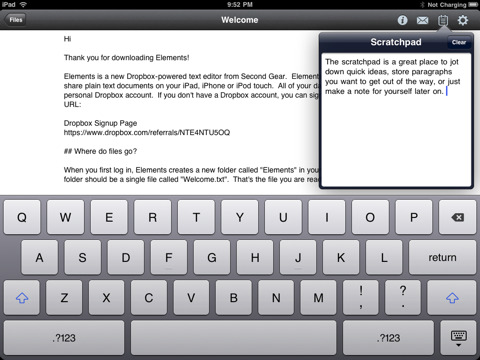