Back when the iPhone started getting more sensors the buzz around the office was ‘wouldn’t Jenga be fun if they used the sensors’? It was good on the iPhone, it’s great on the iPad… the bigger screen really makes a difference! The Jenga iOS game app is not a universal app so you have to buy a copy for your iPad and iPhone as two purchases if you want it on both.

The quote the developer: REALISTIC PHYSICS – Real-time 3D physics simulation, authentically recreating the behavior of a real wooden Jenga tower. Each block is realistically affected by the surrounding blocks, recreating the same strategic depth of the original game.

That says, you can actually tap tap on the Jenga blocks like you do in the real world and the wood moves a little but catches a bit on the wood piece above it, twisting things, tipping a bit, all without the need to find the block that shot across the room under the couch when the inevitable tower comes down.

Looking at the stack of blocks, you can turn, raise and lower your view. Tap a Jenga block to choose which one your going to try to move, tap to move or tap and hold to try and drag, then place the brick on the top. At any time, you can have the system tell you how high the stack is. 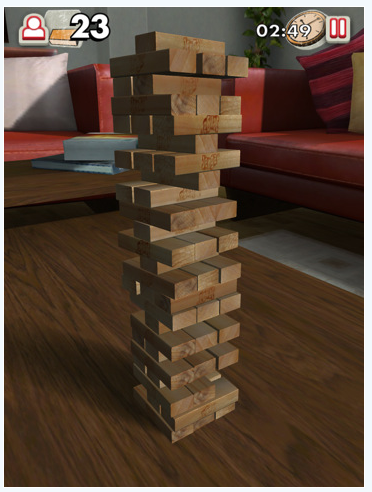 Three levels of game play are available; Classic, Arcade and Pass ‘n’ Play. Classic is the stack of blocks as you would normally play while Arcade offers different color blocks that when used to create a layer of a single color results in coins to buy ‘boosts’. The game starts with a single background, others are unlockable as you go. 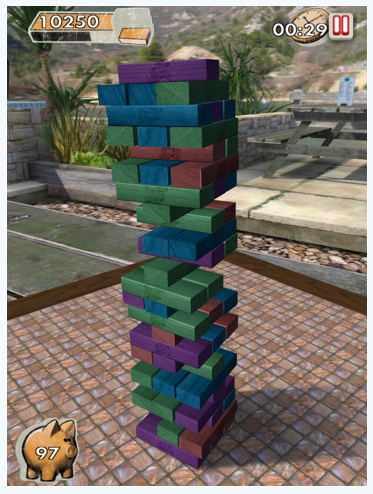 In the Classic mode, you can have the corners of the Jenga block highlighted to show the amount of tension on the block… can’t do that with the real wood blocks.

Finally, in Pass ‘n’ Play mode, you can choose to create up to 4 players that each get a turn tapping blocks. Just pass the iPad around for each person… great fun to just sit the iPad on the table and spin around to each family member.