There is no doubt that Apple will be introducing a new version of the iPad soon. Maybe as ‘soon’ as next month. We have been using our iPads all day and evenings so everyone in our group is happy they jumped in right away. As with any new technology, there will be a few folks complaining that they wish they had waited. There will always be something better tomorrow, just look at where things are currently and make a desision if it is what you need… then buy at that point.

When the iPad 2 does hit, many of the our current iPads will be looking for things to do outside of our daily workload they have become accustomed to.

Most of the units will become ‘home’ units or handed down to a younger family member. We have mentioned the many ways we have been using our iPads in the kitchen, so some will become part of the kitchen while others may be sitting on a stand on the coffee table.

An iPad given to the teen members of the household will most likely use the same apps that we have been using with the addition of more fun app. The iPad is really good at the ‘fun’ apps, you will have to which ones to get.

We have covered a lot of stands we have purchased and used with mixed successes. Taking a iPad and moving it from the desktop and conference room can mean there is a need for a different kind of stand. The idea hit us when we where talking about a kickstarter project looking for funding… a wall mount iPad/iPhone holder called Dockem. At the time of this writing, this option isn’t shipping yet. As well, another kickstarter project for a iPad gamers called PadPivot.

If your thinking about using your iPad more as a mobile infomation device for the family than a handheld computer, you may want to concider solidly mounting it. There are a couple companies offering frames to have the iPad on the wall as a ever changing picture. These could also be used as a weather station and home controller (broadcast music), why stop at just pictures. A mount that you could think about for the kitchen or work area (over the makeup room counter?) is a ‘cabnet mount’ from Griffin.This keeps the iPad in it’s place better than a counter top stand. It holds the iPad tight enough that you can twist the mount up with the iPad still in it completely out of site yet you are still able to pop the iPad out to use in the other rooms.

‘Mounting’ the iPad doesn’t mean just in the house. Many vans and sport utilities come with video entertainment systems built in. Some folks have wired computers into their cars for entertainment or navigation purposes. Another ‘mount’ from Griffin is for the car head rests for the second row of seats to enjoy. The option is a relatively simple solution that makes it easy to remove the iPad for other uses or move the whole assembly from one seat to another.

We should mention that there are fun kids headphones that work well with the iPad in the car too… just in case you don’t want to hear the movie the many times kids like. 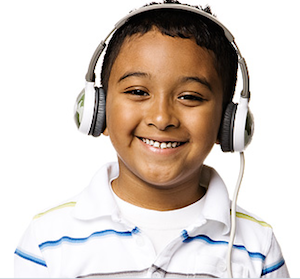 The continued use of the original iPad can also become a fun education tool for kids.

Kids can paint and draw without the concern of ink or crayon marker on the table and furniture. For drawing on the iPad, there is what seems like an endless variety of options. One that a few of us have chosen is ‘Draw & Stamp for the iPad‘ since it lets kids play with electronic stickers and coloring. You really need to look over the list in the iTunes app store to see what matches the unique needs of your own kids. Some have the painting tools labeled with text that kids wouldn’t be able to read, our preference has been towards apps that show the options and are easy to choose. 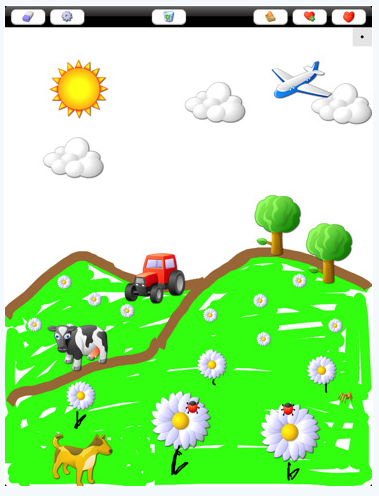 For traveling, when you do not want to haul a box of building blocks along, there are free apps like “Kids Blocks” that allow an electronic version of Lego like structures to be built.

To wrap up, we might mention a new kids application that has just come out. TapTot is an application designed as a kids education solution. It has colors, shapes, numbers and letters lessons. TapTot is a universal app as well so when you buy a copy you can install it on your iPad, Touch and iPhone… just in case your going someplace the original iPad can’t go. 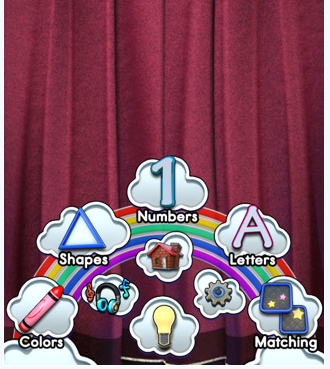