We have a nice luxury working in an office of many iPad users. Each of us do not have to risk buying every app that looks interesting. When someone buys an app, they show it around and everyone makes their own decision to buy or not. This works great for the more expensive apps, you can see if it will really solve your problems prior to hitting the buy to load your own copy.

We have been very honest in our reviews here, pointing out when something is actually usable and any short falls we see in an app. Not so often, but it does happen, an app is so far below the standard of others in the group we just have to mention it. We don’t just say, ‘fail’ because this is only our opinion. Instead, we try to point out what an app does and doesn’t do so you can make your own decision. Just because it doesn’t work for us, it may be the perfect solution on your iPad.

We have covered the power of Photogene and PhotoFactory on our iPads. They both allow us to add filters and effect to images to help the image get a point across we are trying to make. Last week, a team member showed up with EffectsBooth HD on their iPad. The app allows the user to apply a list of 30 effects to an image. Ranging from Oil Painting, Pencil, Old Picture to some distortion and morphing.

This is the image we will use for our example: 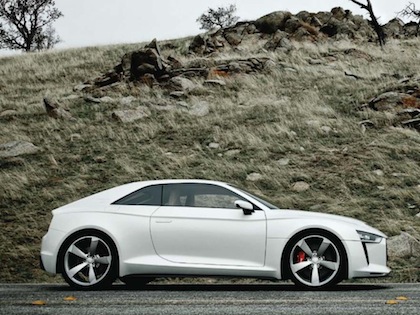 If you choose to use the app in the portrait view and the image is wide, the app automatically squeezes it narrow and tall. 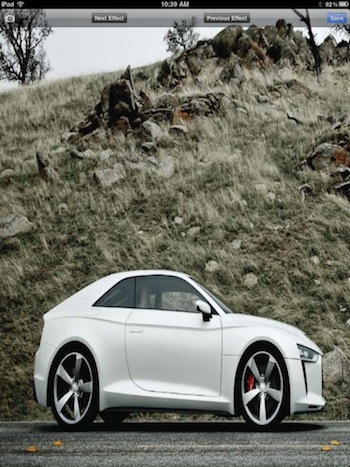 We guess this could be considered a ‘effect’. The next thing you will notice is the controls. There are four buttons across the top; the camera icon opens your iPad’s photo area to select a image to apply the effect to, the ‘Next’ and ‘Previous’ Effect buttons cycle through the effects, with the final button being for saving. You may notice, there is no pull down of a list of effects to use or preview… every time you have to tap next/next/next till you hit the one you wan. 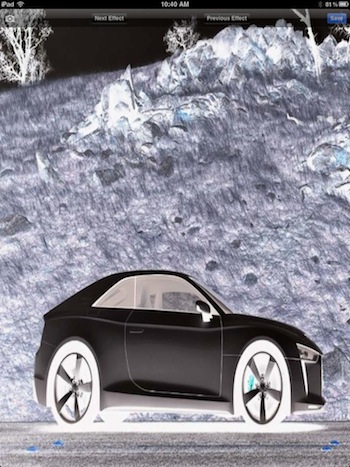 The individual in the office that had purchased this had hoped they were just missing the method to jump to the effect they were selecting but no, there is non. As you cycle through the effects, you have to wait for each one to be applied before you can move to the next. There are also no names to the effects so you can’t move to one you had used before. 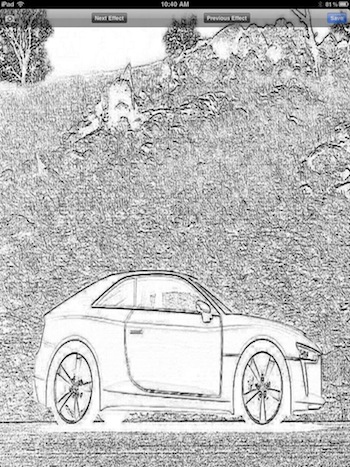 Turning your iPad to the landscape view, you do get the full view as the wide image was that we were using for the example. EffectsBooth HD still offers no additional buttons or access to filters in this view. The app might be fun to site back with funny pictures taken to just click through for a chuckle. For Business or ‘serious’ use though, this might not be the best app to spend your money on. 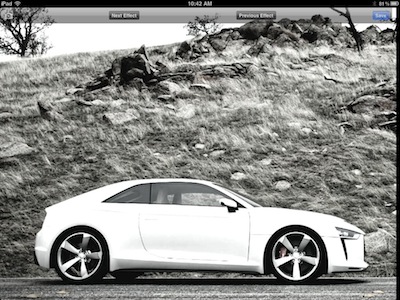 Interesting, the icon on the iPad actually reads “Effects… Lite”. We are really hoping the creator uploaded a lite version in place of their full version and we will see an update. Currently, EffectsBooth HD is $1.99, while PhotoGene is $2.99 and PhotoFactory for $3.99 .