If you use your finger to draw and write on your iPad, you know it can be difficult to get the alignment correct when you first touch the screen. This really shows up when sketching or if you print your letters using a handwritten notes app.

We have long been using the Griffin Stylus (just released in 10 colors) with great success. It is like writing with a pen. The only negative for us is that the body of the stylus is a touch shorter than a regular pen and the tip is only slightly smaller than our finger tip.

Acase has released a new version of their stylus with a longer body and a much smaller tip. We have yet to find out if the earlier iOS had a need for a larger tip. The smaller tip on the new Acase stylus is much easier to see where we are touching on the screen. 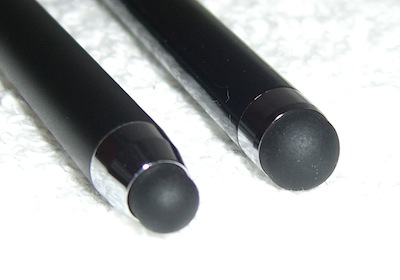 It’s tip is made of a capacitive rubber that is very smooth on the iPad. In a head to head test of the Acase 2nd Generation stylus, the slightly better movement on the screen could actually be felt.

The pocket clip is a bit lighter duty than the Griffin Stylus but much better than the one on the older Pogo Stick Stylus. Time will tell if we have any failure issues since we have our stylus in and out of our pockets throughout the day as we go from meeting to meeting.

Completely obvious once you think about it for a second. The smaller tip of the Acase 2nd Generation wont write a smaller line on the screen than their previous larger tip model. That is a function of the handwriting or sketch app your using. For many of us who are using apps with adjustable electronic ink size, we did move it down a bit since it is easier to see where we are touching the stylus down on the screen.