We mentioned the fun of Diptic a few days ago. An app we used to place multiple photos on a single image to tell a story or give a wider view.

Another option to Diptic is ComicStrip for iPad. This universal app also has layout templates. Although there is only 7, ComicStrip adds the ability to have caption bubbles to further tell the story. The 9 caption bubbles can be added anywhere on the photos. We liked being able to move the bubble tail to match up to the people doing the ‘talking’.

Along with caption bubbles, ComicStrip has 12 ‘stickers’. These show up mostly on the comics we are creating to use around the office more for fun.

Sharing is supported by saving to the iPad’s photo album or out through Facebook and Twitter. To get more mileage out of posting the comic up to Facebook, tag the people in the strip.

Here is an example from the developers…  you get the idea. We admit that we use ComicStip on our iPads more for fun that the serious stuff around the office. 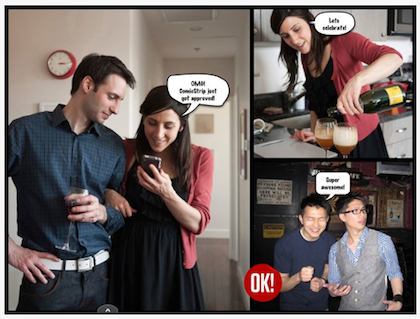