You may have heard that the iPad2 Dock wasn’t in Apple stores yet, that it is much bigger than the previous iPad dock, you have to take your iPad2 out of it’s case to use the dock and that it holds the iPad very vertical.

The iPad2 dock has arrived in Apple Stores now. Not sure what the delay was, they have been available online for some time now. If you go looking for the box, you wont find a iPad ‘2’ Dock. The box doesn’t say iPad2 anywhere except the bottom in small print. 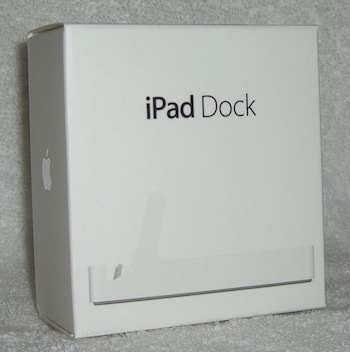 The new dock (right) for the iPad2 is very much larger than the previous model (left). The sync cable and audio out ports are the same between the two models.

The original iPad Dock (left) had a rubber lower area that the iPad sat on. The new iPad2 Dock (right) has a cut out for the iPad2 to sit in for a much more solid fit.

Since the original iPad Dock (left) had a flat surface for the iPad to sit on, the connector rose up from the surface which means the iPad was actually easier to connect but if you pulled the iPad towards you there was a lot of pressure on that connector to twist or break. The new iPad2 Dock (right) has the connector down in the cut out.

Sitting your iPad2 in the new Dock with the Apple cover closed will cause the iPad2 to not sit down in the cut out or be able to reach the sync connector. 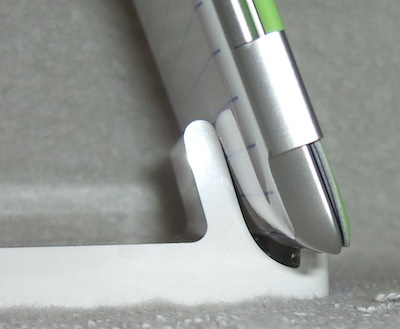 With the cover open or removed, the iPad2 sits very solid in the new Dock. It is harder to seat and get the connector in the right spot the first few times you try to dock your iPad2. It gets better after a few uses. The iPad2 is a relative straight vertical angle which means it works better being farther away from you. Due to the lip the iPad2 is sitting in and the larger size, the iPad2 feels like it can take a lot of pressure on the screen without it tipping over. 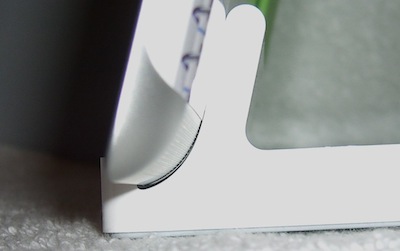 Like having the Apple cover closed across the front, you can not dock the iPad2 with the cover around the back. With such a vertical angle though, if you fold the cover, you can leave the cover on when in the dock. The new Apple cover is very quick to put on/off compared to the older model’s thin cover so other than where your going to put it when not in use, the cover is quick to take off and return when using the dock if you prefer. 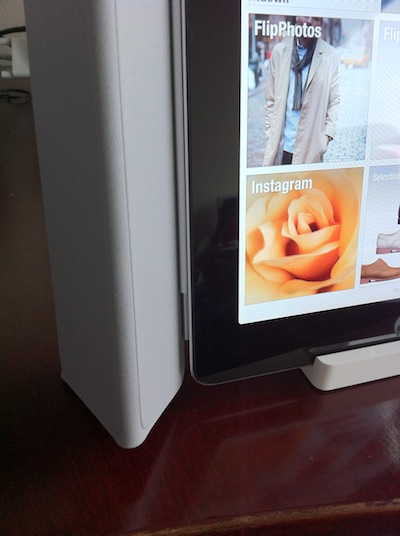