If you have an iPad 2 and one of the Apple Smart Covers, your aware of how slim the iPad has become. The Smart Cover is pretty nice since it doesn’t need any big latches to stay close and it folds behind without making the iPad much thicker. Magnets are used in the cover, several to keep the lid closed over the touch screen and a couple more to keep the hinge connected to the edge of the iPad 2.

Sometimes it seems the lid is held on pretty good and it takes a special twist to pull it free. Other times it seems to just jump off. Today, to our surprise, one stayed on well enough to swing the whole iPad 2 around where the Smart Cover was the only part being held onto.

After we all started to breath again, we found a client had pulled a fast one on us. They had on a new cover from iSkin that works with the Smart Cover. It was the first time we had seen a case that covers the back of the iPad 2, working with the Apple Smart Cover.

The ‘case’ is the iSkin solo Smart Cover Companion. It covers the back of the iPad 2 with a clear hard plastic and wraps around the hinge of the Smart Cover to lock it onto the iPad better. 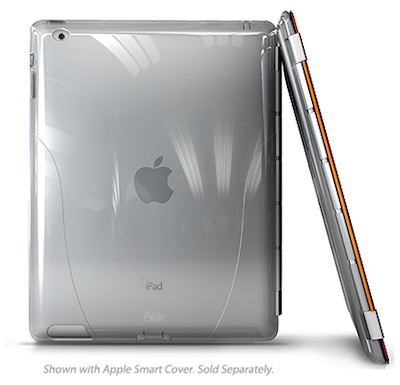 These are images from the iSkin site since we didn’t want to go over the top with our client and ask to take pictures of their iPad 2. We have a couple on order now so expect an article in the near future where we see just how well that cover really does stay on.

The iSkin site had the below image showing how the edge of the back case latches over the Apple Smart Cover to lock everything to the iPad 2. The site has a kid swinging the iPad around by the cover which must be where our client got the idea to surprise us today.

It would appear that the solo Smart Cover Companion will let us keep using our specialized vinyl skins too since it is clear. We’ll see when ours come in if there is enough of a gap across the back to go over the skins.