We have covered a couple app by Hog Bay Software for creating and managing tasks (syncs to Mac desktop app) and Plain Text Notes. The core to their app is keeping the interface simple and letting you get in and out without any fuss. So, when we need to jot a quick note down going into a meeting, it’s generally one of their two solutions.

An app we have mentioned but not covered in depth is the Hog Bay Software WriteRoom. The app is centered around keeping a person on task when you need to write more than a quick note. Instead of using a full power word processor app, WriteRoom has few adjustments or distractions. You can adjust the font, the text and background colors. Other than that, the app is all about getting you to pay attention to writing. 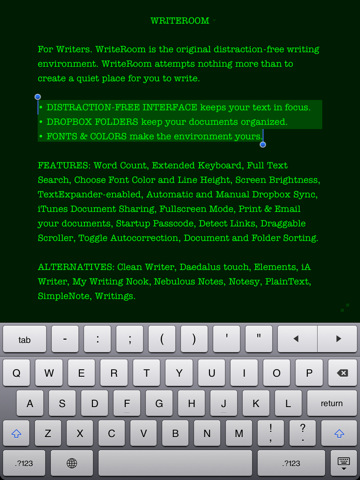 The WriteRoom app is pretty popular with the folks in the office writing ad copy or blog posts. It works in both landscape and portrait views, supporting folders and even Dropbox sync for sharing your creations. Being a Universal app means you can buy once and use it across you multiple iOS devices. 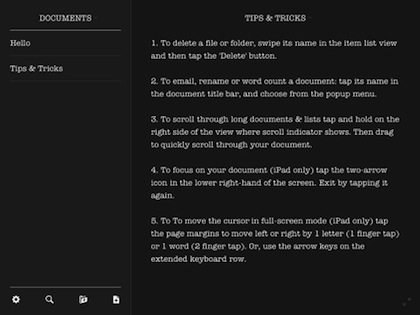 • Dropbox sync and iTunes file sharing access to your files.
• A new universal UI that works on all iOS 4.0 and up devices.
• Many new font and color settings to customize your writing room.
• Drag-to-scroll scroll bar for quick navigation bigger documents.
• In full-screen view, tap margins to move cursor toward margin (iPad)
• Extended keyboard row with customizable keys. (iPad)