There are those that make simple apps that barely touch the OS features of our iPads… they work just fine. Then, there apps that go over the top, over complicating by trying to fit in every feature.

An ‘app’ we are taking notice of is actually a interactive book for the iPad. And… it’s for ‘kids’. We are talking about “Bartleby’s Book of Buttons Vol. 2: The Button at the Bottom of the Sea”. We say ‘kids’ but the book game isn’t just a simple kids game. From the developers:

“Join Bartleby on his new adventure to find the Button at the Bottom of the Sea! Meet new characters and visit some old ones too! Like Volume 1, the Far Away Island, Bartleby is on a mission to add buttons to his growing collection. Push buttons, switch switches, tap tubes, turn knobs, rotate the iPad and iPhone to help Bartleby in his journey! Remember, every page is a puzzle that must be solved! So pay close attention to the text and hints Bartleby gives you!”

Sounds fun enough, but what has our interest is that we finally have a ‘game‘ that works nicely with a HDTV through Airplay. In other words, the Universal app allows you to play on the TV using your iPad as a controller. 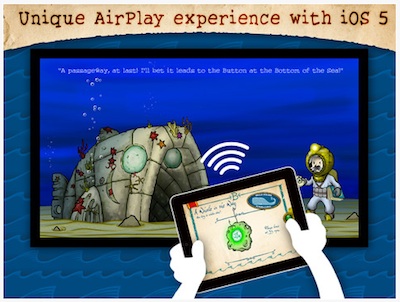 If you believe that a game needs a reward to be worthy of sticking with it, there are over 30 ‘stickers’ that can be collected and printed, directly from the iPad using AirPrint. Brag your score to others via Twitter, since that too is built in with iOS5.

Finally, Bartleby’s Book of Buttons takes advantage of iOS5’s connection to iCloud to store progress. By doing this, game play can be picked up where left off between devices. Don’t have your iPad handy, just start up the game on your iPhone and iCloud will tell the game where to restart.