We are pretty sure everyone has seen or at least heard about the Disney animated movie ‘Cars’. With Lightning McQueen and his friends buzzing about mountain roads and race tracks.

Disney has brought the movie to their kids toys which work directly on the iPad. The cars come in a variety of individual and multi car packs. Each work directly with a free AppMATes app. We found these cars in stock at the local Target store and one coworker at the Apple Store this weekend said they saw them there too. 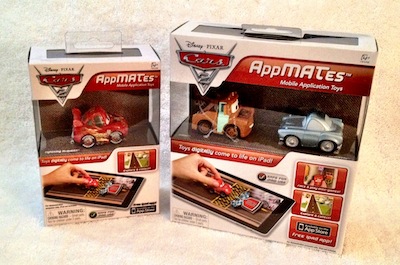 Interesting is that the plastic cars do not have turning wheels. Instead, the cars are held by their sides and are moved about the screen. The iPad app sees the movement and changes as kids explore the roads or play the games. On the bottom of the ‘Cars’ looks like three metal circles and three clear LED like areas too. We are still looking into if the bits on the bottom of the car interact with the iPad or the fingers no either side of the car being so close to the screen get picked up by the iPad screen. The Cars are sealed so there is no batteries to wear out and need changing. 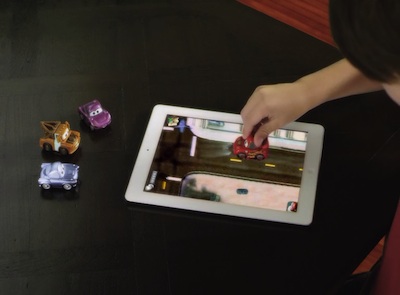 For a view of the roads and action, you can actually download the app and play a little ways with just your fingers. The AppMATes app calls it the “paper car” mode. Using two fingers on the screen just like they were on the sides of the plastic car. 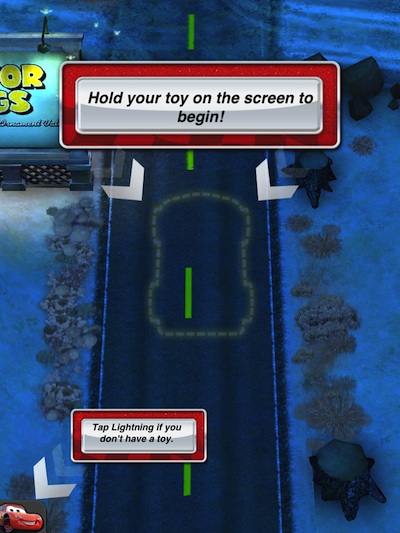 Items can be added to the Cars within the AppMATes iPad app. These are needed for interacting with things during the game mode. The screen shot below is from the game with the plastic car zooming about the screen. Since the car is over the screen, you don’t see the outline of the car under it. You can see the green dots associated with the fingers holding the plastic car over the screen.