There are whiteboard people, there are sticky notes on the wall people and there are notecards on the wall people. When you start talking about throwing things up on the wall and seeing what sticks, folks usually drop into one of those three groups. All three have something over the other, making them a ‘preferred’ method to someone.

A whiteboard allows for the text to constantly change without throwing anything physical away, but is hard to resort thoughts. Stickies are generally the standard desk size so they have limited room but come with their own sticky stuff so they can be stuck and adjusted easily. Notecards provide more room to write, are thicker so they feel firm in the hand but lack any method to stay on a wall… and take up room before/after the meeting per that bigger/thicker size.

A client came into the office this week and presented the ideas her team had come up with prior to our meeting. She did so with her iPad, showing a screen of notecards arranged to represent their expected path and results. We of course all wanted to play moving the cards around but she kept the meeting on task.

She showed us several revisions they had done to better explain how her team got to where they were. Even a stack of thrown away ‘options’. When the meeting wrapped, she emailed an image of her card board and a text list of what they wanted… both in a single email.

She might as well have worked for the company that wrote iCardSort. The app on her iPad did exactly what was needed, so much so that we were wondering why non of us had thought to go look for a card organization app.

A bit of research after the meeting, it was found that everything she did was built into the single iCardSort app. You can create cards, write on them and drag the cards around the screen. A double tap on a card lets you edit the text. For the ‘versions’ or ‘idea path options’ she showed, iCardSort has a ‘Duplicate Deck’ option, which gave her team the same cards to play with again, without disturbing their original layout. No idea if they started with a clean slate of the cards (via the app’s Shuffle the Deck) or if they started with where they left off on the duplicated ‘wall’.

The stack of cards they decided to not use where just cards they piled in one spot. When a person tap/holds on the stack, the cards jet out in a circle around the finger for a quick review.

Finally, the final solution email is another built in feature of iCardSort. She created the email fast enough that we knew there must be a ’email’ option in the app. The cards text becoming bullet points in the email along with the image of the actual layout was a nice touch. It is easy to forget that the text on the cards is digital text, automated is the step where we have always had to type what the cards on the wall final answer was. 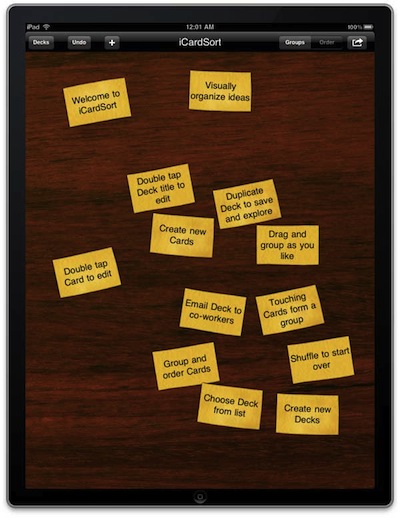 While we prefer the ‘wall’ to put our yellow cards on, iCardSort allows both the background and the color of the cards as variables you can choose to match your needs. 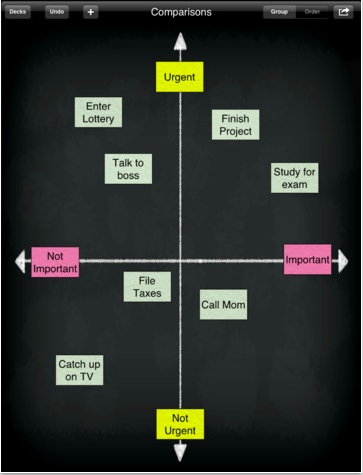 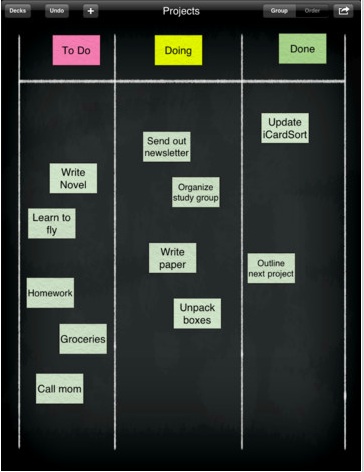