Books for the iPad are becoming more than just words on the screen. Apple has attempted to get more people interested in making more things happen in their eBooks via the Apple Book Authoring tool. The desktop solution does make it much easier to add moving images and full feature navigation, but for full interaction there is still a need for stand alone apps that are ‘books’.

Some education groups have stepped up, but the biggest and widest known titles are kids books. The ‘kids’ iPad interactive books do not have to have the level of enhancements a ‘adult’ book would have to have. But, they do offer more than what is possible through a simple page turner print book.

As an example, Story Bean is offering their Three Little Pigs eBook ‘app’ for free through the 7th to show what is possible. We call it an app rather than a book since it loads to the iPad as an individual app instead of appearing in the iBooks app. Installing, then launching the Three Pigs story app, has a starting screen with options – 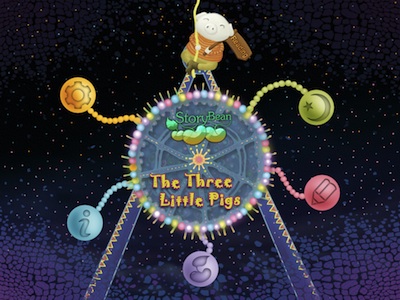 The story can be read with a natural voice in English or Japanese. A couple lines of the story appear at the bottom of the screen with a graphic that matches the text. When the text reading has completed, a tap the arrows will move the story forward/back. 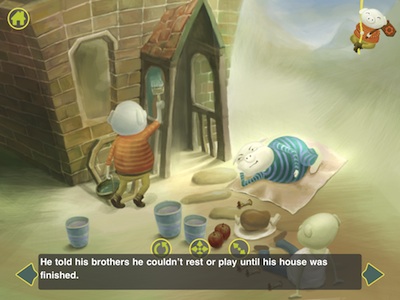 The kids story book app, Three Little Pigs, has some interaction but it is on the light side. A arrow graphic appears when kids can cause the story to have an action happen. We say ‘light’ since some kids stories has more actions happen due to kid’s taps and swipes. This is a nice start to kids ‘playing’ with their iPad books though. 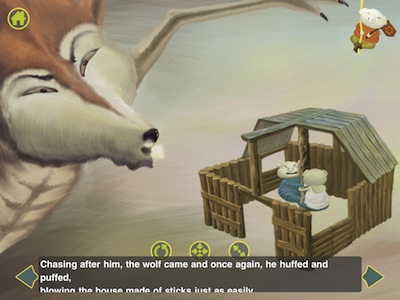 If the desire is to read the story or have it read without any need to interact with the book, that is a full story option too. This view of the story makes the app more of an audio ‘book’. It is nice when kids want to read along or listen to a story in just two taps. 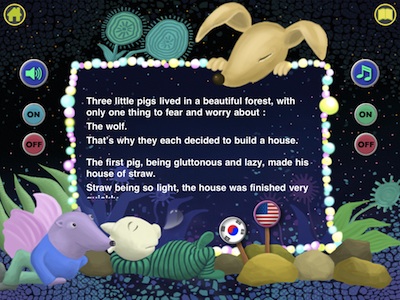 Some level of ‘customization’ is available in these book apps. In the case of The Three Little Pigs, kids can enter their name to have it appear on the opening screen. Similar to writing their name inside the cover of a print book. In the case of the kids book series we covered here, they are actually Universal so a small screen version on the iPhone means a bit of kids entertainment can always be handy in the pocket.