A few facts we know… the iPad screen does not know how hard your pressing on the screen. There are a few options coming that are based on high frequency audio or bluetooth for feedback from how hard the pen is being pressed on the screen, but it’s the pen that is saying how hard it’s being pushed. It is possible that a smart app could ‘see’ how big your finger or stylus is which is a result of the tip spreading when more pressure is being applied.

The Sketchtasy app is being marketed as being able to sense the pressure of the finger/stylus on the screen. So, we were excited to see if they figured out how thick the area of our finger was on the screen. Many others make a claim of sensitivity, when what they do it widen the line in corners or when the stylus was moving fast. Nice effect but not ‘pressure sensitivity’.

After several of the team played with the Sketchtasy app, it raised a lot of questions. Pushing on the screen with a finger or with a soft tip stylus seemed to have no viewable result from writing lightly. We tried moving quickly, we tried quick turns vs large circles, and printing/cursive writing. We couldn’t come up with how the app decided what was more or less pressure of the finger/stylus on the screen.

There is an adjustment slider for the sensitivity to the pressure sensitivity. There is pen color quick picker, or tap/hold on one of the color squares to bring up a highly tunable color picker.

Using our finger to write with, and a soft tip stylus, we could see where the area of both increased when we pushed harder on the screen. This didn’t seem to make a difference. So, we went the other way to test. Using a Jot Pro Stylus, we wrote and scribbled with the sensitivity set at the low end and at the high end (screen shot below). The Jot Pro Stylus is very solid and has a tip that is a flat plastic disc which won’t change it’s area touching the screen if we push harder or not. It appears that when writing, the more you write the wider the line becomes. Yet, the size of the stylus to screen, speed or writing and pressure on the screen didn’t change. Perhaps Sketchtasy is off a bit on it’s measurement or just making assumptions, we will continue to text and post our results. For now, we will continue to wait for the new Jot or Jaja pressure sensitive stylus options for true physical feedback. 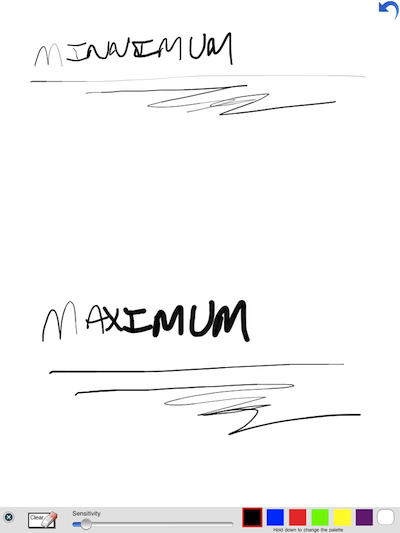