We have been following the development of several iPad styluses that will impact what your working on differently depending on the pressure you apply. Adonit has been showing their solution at conferences so we have been expecting theirs to hit the market first. Several companies have attempted and not done well with their pressure solutions. Since people were actually able to handle the Adonit Jot Touch and see it work as expected, we put a lot of our energy towards getting in line at events when play time was being allowed.

Now, Adonit is shipping, directly through their site or Amazon.

The stylus knows where it is on the screen like the iPad recognizes any other stylus. But, the tip reacts to pressure and transmits that data to the iPad’s app via bluetooth. Due to this wireless feedback, the interaction works only with apps specifically enhanced to accept the input.

With drawing apps, the Adonit Jot Touch will draw a thicker line like you would expect when drawing on paper with a ink pen. We are anxious to see how pressure sensitive interaction might work with apps outside of drawing and writing. For now, enjoy apps like Procreate, Sketchbook Pro, ArtRage, Clibe, Animated Desk, and Note Taker HD.  When we have the pens in the office tomorrow, we’ll cover how they work on our own hardware. 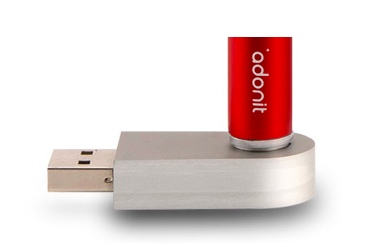