Not many ToDo apps let a person have sub tasks under the main item. This power is usually more of a project management app feature. But, if a task has dependancies, how does a person show those? To handle the need, we generally create hierarchal lists.

Meetings notes without much management can become paragraph after paragraph of text that never gets referenced. Another place that hierarchal organization comes in handy. Create a line of what is being discussed, then a sub with a person’s name and what they added to the conversation. Or, line items for discussions, decisions, and take aways.

After the hierarchal lists starts to catch up, the line items with sub line items can start getting long. The better apps that support hierarchal lists will let the user collapse the lists so that only sub items are viewed when needed. Even then though, these lists can get long.

Enter Cotton Notes the lists app that not only lets you create sub items but also to drill down the sub items and more than just one layer. Create lines, then create sub items under that. Use the ‘+’ and ‘-‘ to expand/collapse groups. Each and every line has a arrow to the right. Tap the arrow to be taken to a new page with the selected line as the header. With Cotton Notes, you don’t have to be sweeping through an endless list of top level items that expand to an even bigger list. That can still be done but now there is the option to just view that part of the list by it’s self. 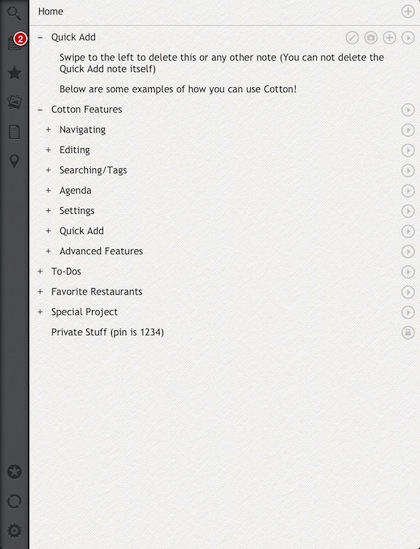 Below is a view after tapping the right arrow next to the line Cotton Features. The page shows the items at the next level down and as you can see, each line item in this group can also have sub items. Text doesn’t have to be a single line, Cotton Notes allows for full paragraphs to be entered. 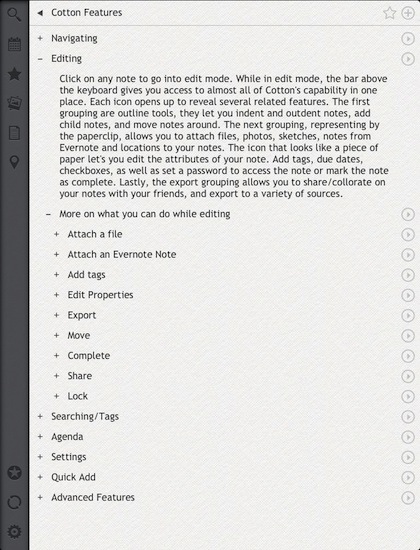 Lists in Cotton Notes are not just a bunch of text lines. Each line (with it’s hierarchal item below it) can actually have Tags for searching and grouping later. And, lines can be treated as timed tasks by assigning a date and time to it. Alerts can be shown at the left list area as well as a badge on the Cotton Notes launcher icon. 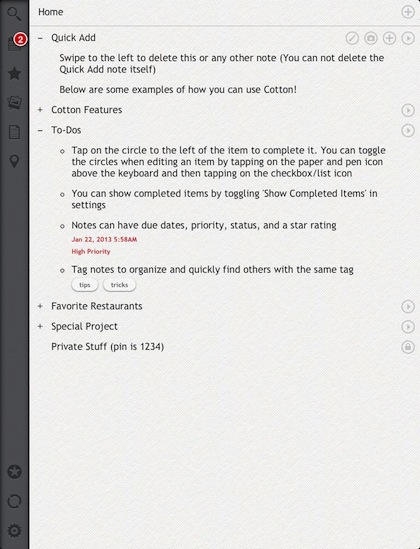 Notes and Photos (and location pins too) can be added to a single line, a hierarchal list or a full group of lists. To reveal and hide, just drag the left side of the page. If an item is attached in Cotton Notes, when you view up one layer, the item is still viewable along with the items in that group. This means, at the highest level, you can see and search through all of the items attached below that level. This is a particularly handy feature if there are notes written on a whiteboard or handouts that you can take pictures of with the iPad. No longer will they be lost or stand alone photos… as well now they are matched up to the meeting notes they are related to. 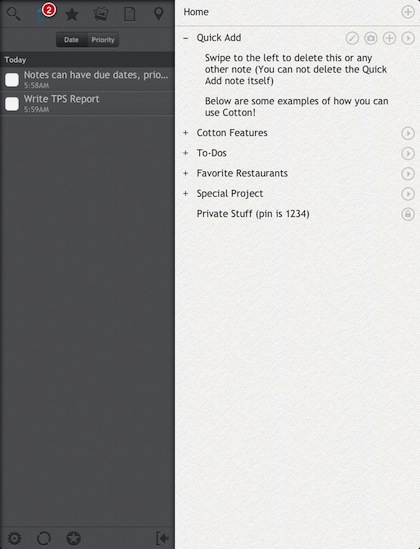 When typing into Cotton Notes, quick access to tools are available through buttons along the top of the keyboard. This is a nice way of giving access to what is needed without cluttering up the screen with buttons when they are not needed. 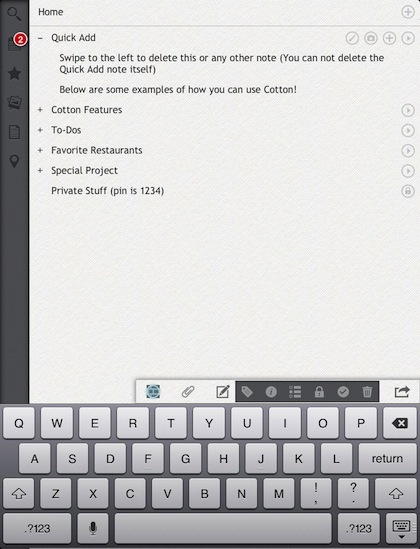 Lists are not trapped to a single iPad, Sharing with your other iOS devices can be done through Dropbox. As well, files can be pushed to your Evernote account directly without having to send as a attachment to a note. Background color and text font is manageable through Cotton Notes Settings are too. 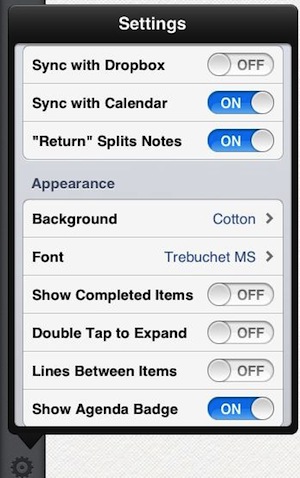 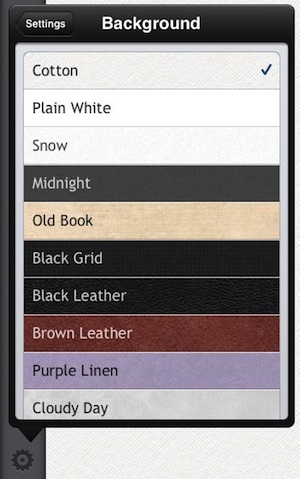