One day, hopefully not when in a meeting, when retrieving a document on the iPad to edit, a message will pop up on the screen saying the device doesn’t have enough available memory.

What? We just have a couple presentations, a few PDFs and a video or two. Most of the team don’t even have music on their iPad, instead streaming from services (in no particular order) like Pandora, Spotify or Rdio. Where could the memory have gone? 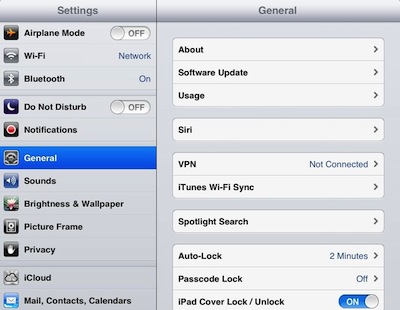 Initially, the screen will only show the memory being used on the device and on the iCloud account connected to the iPad. After a bit of working, the system will show a list of app and their memory footprint. The shown amount of memory is for both the app and data the app is using. You may notice that the document apps listed on our screen shots isn’t using a lot of memory, that is because we are heavy users of cloud storage, only downloading the documents we need and returning to the cloud after editing. 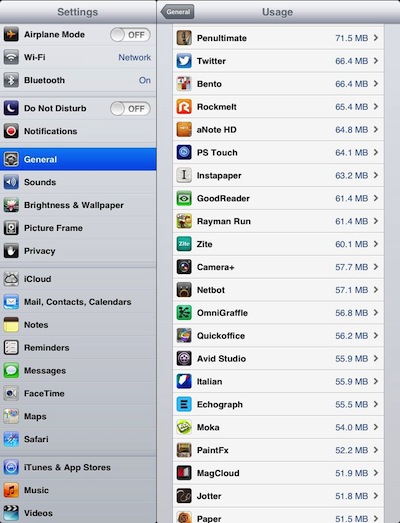 Choosing an app shows the break down the app vs app’s data memory. A button to delete both is provided (similar to tap/hold on an app’s icon in the launcher then using the ‘x’ to remove). We found that the team members that are users of social share services like Instagram and Pinterest where in for a surprise. While the Instagram app installs at 20 meg, we had multiple devices she the app/data taking up 1.4 gigs! It would appear a cache of all photos are kept on the iPad. Without a ‘clear cache’ option via iOS or the app, we chose to delete and reinstall the big memory hogs to get the gigs of memory returned. 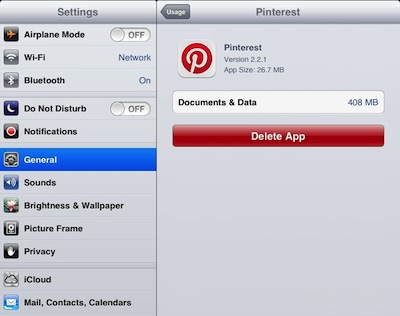 Now… the scary part. BACK UP YOUR iOS DEVICE PRIOR TO DELETING APPs THAT TAKE A LOT OF MEMORY!! The three individuals that had the 1+ gig Instagram installs noticed slowness using the iPad’s Launcher following the app/data removal. During this slowness time, do not move other app icons around or do a device restart. Both actions resulted in the iPad going into a brick mode of just showing the start up Apple icon. The only way to recover was to plug in the sync cable and hold the ‘Home’ button causing the iPad to restore from backup.

Another place to watch for available memory:

If you read magazines on the iPad, we do a lot, don’t forget you can archive off magazines and redownload later to reference if needed. Newsstand Magazine apps generally have the option easy to find and use, as does Next Issue. Zinio hides the magazine cover from view when archived, to redownload choose the edit button which shows all magazines on the account.