First work day, Monday, after the iPad shipped… they are everywhere in the office. Everywhere in IT and management, no so much with sales or operations. They all want to play with ours, for now they have a mixed bag of tomorrows and next version.

First thing, staying connected to a corporate wireless is a chore. Moving about can cause the need to re-login via a Web site interface… this extra effort may lead to mobile users heading to simpler passcodes. That a bad thing as IT looks for a reason to block mobile hardware on their network.

Carrying the iPad around the office proved to a dual challenge. The device is slippery on the screen side so you want to squeeze grip it but then there is finger prints. There is also the fear factor of bumping into things and denting the nice back. Both will go away over time as people start using their iPads as everyday devices. A quick review at the end of the day showed a lot of users heading to the Apple store or Best Buy to pick up the Apple folder case. The outer edge is a bit of a put off but the thinness and multi functions makes it an easy sell.

Not too many docks showed up, and only a handful of people started sharing their files to their desktops via WiFi. A high percent had set up a cloud storage (DropBox) over the weekend and loaded up GoodReader and Air Sharing with meeting notes, PDFs and powerpoints. The app was acceptable on the iPhone but has been a hit here for the iPad.

The fun of TV and Movies anywhere in the office, while not getting old, was replaced with the need to get paid at the end of the week so was replaced with reference PowerPoints. A common sight was a person using the iPad presentation to speak to and editing the presentation with notes on the desktop at the same time. Keeping a clean copy to continue talking to. This proved handy when sharing the desktop version for a call then using the iPad version to jump ahead.

Email everywhere was handy… no need for a notebook in meetings when you can reference your previous notes and keep up on emails. Not that we do emails during our important meetings.

By mid day, we started seeing FAQ docs being done in Pages on the iPad and several examples of graphs showed up in presentations that had been created with OmniGraphSketcher.

Note taking received a mixed level of satisfaction. For folks replacing their notebooks in meetings, they just typed out notes in their fav solution. Either a document app or a listing app like Outliner.

For folks that where planning to replace their paper notepad with the iPad, found it challenging to find the right (currently available) app.. A sketching app might be ok short term but it doesn’t have the ability to store and reference notes later. Evernote, loved by keyboard users could not be used by this group since it doesn’t support ‘ink’. NoteTaker has yet to be updated so it only works in 2x mode which showed over sized pixels.  WritePad works very nicely for translating writing to type but most often the request was for being able to draw arrows between text which isn’t handled with this app. Towards the end of the day, the updated version of myNotes seemed pretty good. It allowed to add typed text to free form ‘ink’ and then the docs could be saved. Missing is group sharing of the docs to the desktop, but will be worked around for now by using PDF copies of the notes. Meta info and more robust storage, share and sorting is a hopeful addition in the future. 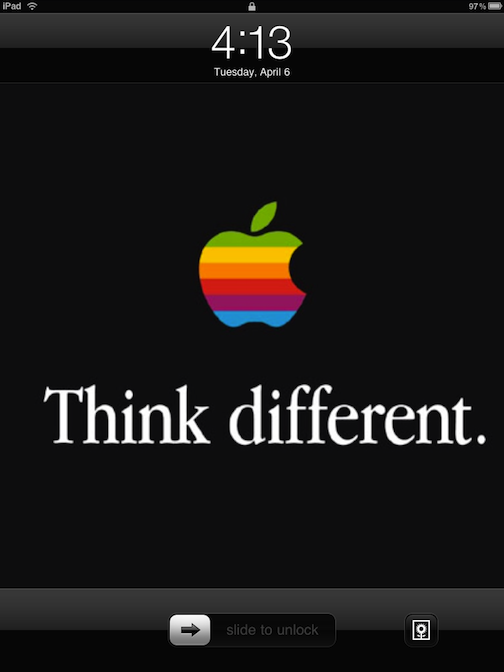