We have yet to see a iPad specific version of Skype released. If you don’t mind a pixelated app, you can have Skype on your iPad in 2x mode. It runs the same on the Wifi iPad as it does over Wifi on the iPhone so we have an option to call when we need it. The iPad’s that have 3G aren’t cell phone service rather only for data so it will be interesting to see if it get’s blocked in the future too. Either way, Wifi should continue to work for calling Skype-to-Skype so we will continue to chat with our friends and family… and coworders, overseas for free.

Today Skype released a updated to their iPhone app (same we have on our iPads) with the following news… and warning:

Upgrades / improvements include:
– Call using your 3G connection. Skype-to-Skype calls on 3G are free until at least end of August 2010, after which there will be a small monthly fee (operator charges for data will still apply).
– Near CD-quality sound for Skype-to-Skype calls using wideband audio (SILK codec) on iPhone 3GS and 2nd generation iPod touch.
– Enhanced call quality indicator.
– Improved start-up time.
– Fast access to the dial pad from iPhone home screen. 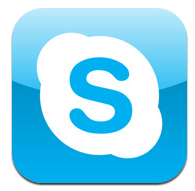