We have covered Zinio with it’s readily available list of magazines you can read on the iPad. While they are electronic image versions of the print magazine, they are nice for saving a tree and getting quickly without postal delivery damage. For a most ‘interactive’ approach, we covered our move to the Newsstand version of Wired, Wired UK and Fast Company. All of these magazines have more actions in articles with hot spots, 3D images, movies and scrollable text rather than just being a ‘page turner’. These are produced by Conde Nast.

Many other print magazines available in the Newsstand iPad app are being assembled and distributed by PressRun. They have a slightly different interface but compatible features. Once you install the ‘free’ app, you can choose to purchase a single or yearly (auto renewed) subscription. Some come with free iPad content if you already subscribe to the print version and link the two together.

We were excited to see Stuff finally jump on board with iPad distribution. The content is in the digital tech area and fits nicely for the Wired/Fast Company subscribers. The navigation is slightly different between the two magazine publishing systems. For the PressRun’s version of Stuff, the navigation slider is at the top in a very slim line, better as a progress bar then to actually use to move through the magazine. Below the slider is quick links to the top areas of the magazine. Most are lists of content within them that contain hot spots to jump directly to articles.

Below, you can see the ‘+’ circles letting you know that there is an action that can happen by touching that area of the page. In this case, it changes the description text on the page, on other pages you will jump to another part of the magazine. The graphic showing the arrowed circle around an object will take you to the back side of the electronic device being shown. It’s a cool interaction that feels better than flipping to another page. We need to get a copy of this same magazine in print to see if all of the enhanced views are printed too or only in the iPad copy. 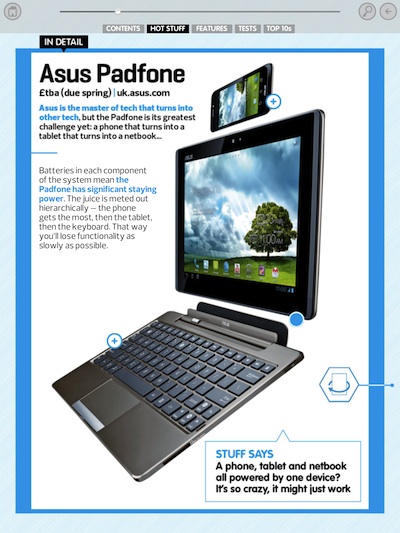 The interactive elements of Stuff continue with a magnifying glass for a full screen view of the art. That feature is more important for some images with fine detail. Below on the left is conversation bubbles between two individuals that you sweep through to see point/counterpoint discussion. In the lower right is a live stream feed from Twitter, which would only work when you are reading Stuff on an iPad connected to the internet. The content is available ‘offline’ but some of the interactive elements require being online. 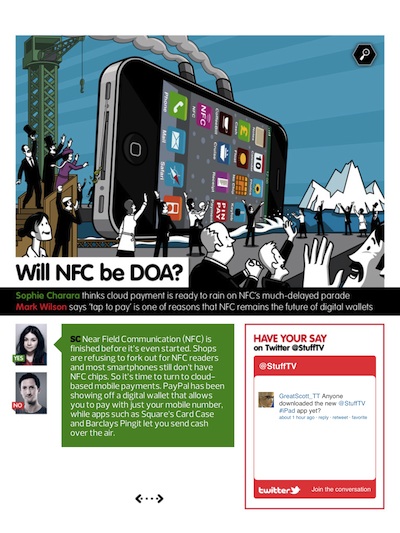 In this article page instance, Stuff has several text areas to scroll through to read without flipping the page. As you can see at the bottom of the page, this is page 3 of 15 pages. The arrow down is letting you know the next page is below this one. Rather than having an endless scrolling up/down, after a few pages the arrow will be pointed to the right to move across to a new series of pages. It makes for less top level pages to sweep through. 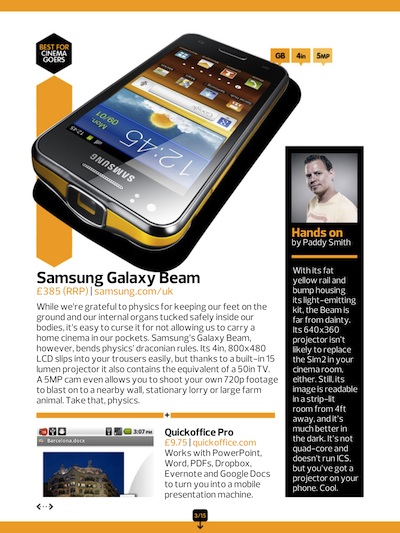 If you have seen Stuff in the book store’s magazine rack, you may find it in Electronics of the ‘Men’s’ areas. If in the Men’s area it is because the shelf stocking person didn’t bother to read the cover or look inside, they jumped to a conclusion based on the cover art. Yes, Stuff usually has a lady model on the cover and yes that same model is inside, generally in a review area, but they always have more clothing than you will see on a news Web sites.

The only negative for us so far with moving our subscriptions to Stuff onto the iPad’s Newsstand is the Issues area. This being the first edition, there is two pages to view copies you have purchased or editions you may want to buy. What about after we read the issue, do we continue to loose that memory space on our iPad? If we can remove, it is just archived so we can redownload for later reference? 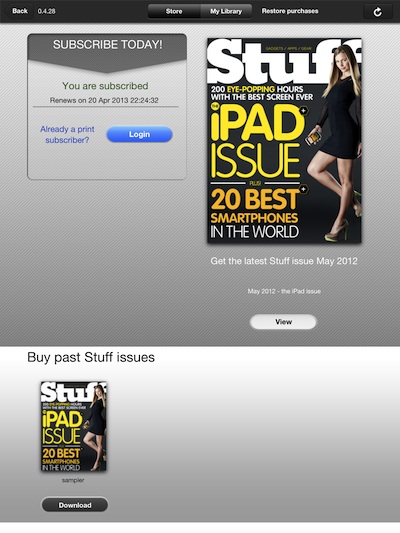 For a quick overview of what we are talking about when it comes to the UI, here is a page that is in all of the PressRun interactive magazines outlining the navigation and hot spot features. All pretty self explanatory, just different if your used to using the interface Wired/Fast Company uses.

If your new to iPad Newsstand magazines, the general complaint aren’t about the content or the content layout, rather with how long it takes to download the magazine copies. We took a comparable sized file and downloaded to our desktops as well downloaded through Dropbox to our iPads and it was faster. We do not know (yet) if the magazines are being pushed to our iPads via the publisher through Apple or Apple is storing/distributing. Either way, someone needs to review their speed-to-delivery before the negative press impacts future readers. 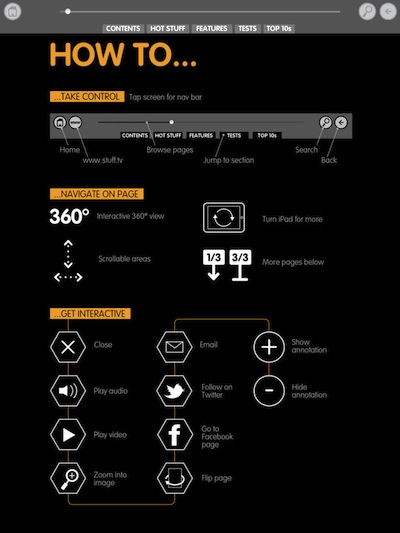