Remember way back in 2001 when Apple introduced a little bricky thing they called the iPod? There was a lot of folks that jumped right out and said how silly it was. Most memorable quotes came from people had not even had it in their hands. Much like the iPad now…

We are admittedly Apple product fans. That is to say, we appreciate the products stamped with the Apple logo. They are a step above in their design and usability. They, just work.

When the iPad was shown by Steve, we had mixed emotions about it. It did what we wanted but it didn’t knock us out of our chair. Hmmm… much like the iPod had been. But then, isn’t what Steve does the best? He and his team of creative folks come up with a new idea, a new direction. Then they release a bit of that… wait a while and release more on the same platform. Taking us down the path, where we need to be, the place we wouldn’t have accepted if it was all shoved on us in the beginning. Genius… unlike a smartphone (what did they call that, something other than smart?) which came out a few weeks ago that did ‘everything’ but nothing very well.

Before you jump on board with the iPad or start downgrading, hold one in your hands. Think about how it would or wouldn’t work in your life. What can it do for you, it shouldn’t be thought of the other way… in the end it might not be perfect for you if your thinking of using it instead of your notebook. If your thinking about enhancing your current system and extending your reach, you will want to play first, then decide.

For a walk down memory lane, here is a fun post about all the smart things people said when the iPod was first introduced. 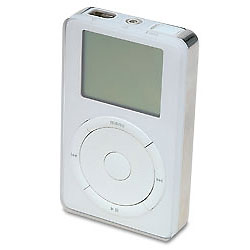