We mentioned that we had a list of To Do list managers we have used in the past. Of our list, most have not been updated to run on the iPad yet and one has (EasyTask) but it didn’t sync to the desktop anymore. The iPhone version of EasyTask was popular because our lists where consistent across multiple iPhones and our desktop computers. When we downloaded the free iPad version, the sync was missing.

Today we received an update from Orionbelt that their EasyTask for iPad now syncs. It is still free too. Getting our team’s ToDo lists and Project Tasks back syncing across multiple people to view and edit to show progress. The desktop solution for Mac or PC is $20, available through their site.

If you grab the latest, they hid the sync button in plain sight. Tap the ‘Lists’ button, the Sync button will appear at the top of the box. The sync happens over the Internet so you do not have to worry about the iPad and desktop being on the same network like many other WiFi sync methods used. 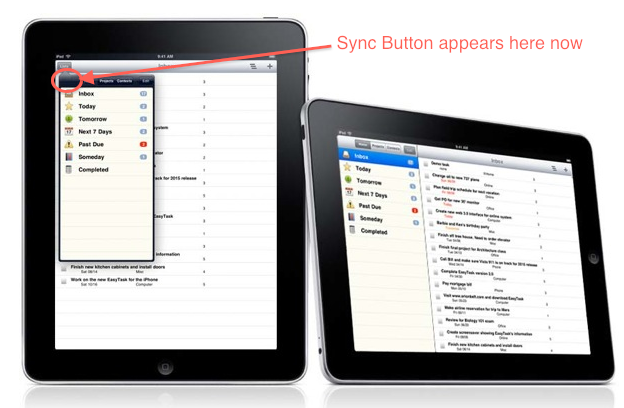