… or “iPad Dock In The Kitchen Part 3”. Prior to the iPads making their way to our doorsteps, we spoke to what a world around the house would look like. Some of the solutions where from pre-release info we knew and others was functionality from currently available versions of apps.

One impact we have felt is proper management of the house chores list (commonly refered to as the “Honey Do” list). We can use any of the many text and notes apps, which allow sharing but not syncing between devices. When something gets done, there are multiple places to update.

The ToDo app from AppiGo has been being used for these lists in the house for years. It is a nice ToDo list manager that in our case holds household, family individual and a few work lists. The hidden strength of this ToDo option was that it uses RememberTheMilk.com as a sync conduit. Any member of the house with their iPhones or Web page access can create, edit and update lists. A very handy feature when at the store as a shopping reminder or more details.

Sadly, AppiGo has yet to update their app from the iPhone screen size to the iPad, and it is very rough looking when running in 2X. This goes back to all the chatter before the iPad came available. Who would do a ‘untested’ version for day one and who would wait to do more detail work to release later. This works better for some apps, ToDo apps have too many options to wait long. Once a person buys and different solution and get all their family info into it, switching later is highly unlikely.

Another ToDo app, EasyTask, has been popular around the office is now offering a iPad version. The free app synces to a Web interface so it is a possible home option where multiple devices need to update. There is versions available for your Mac and PC too. Interesting though… the iPad version (not a Universal app) doesn’t sync to the Web side like the iPhone version does. Seems unusual to be not including such a important feature. We’ll keep watching and let you know what we end up using, how else will the fence repair get checked completed?! 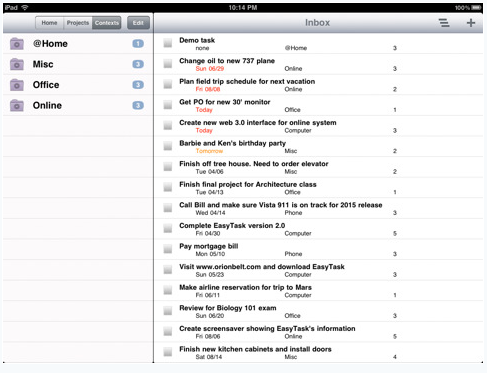