Toys have started to appear at the office. Not just any toys, ones folks are controlling with their work iPads and iPhones. The toys are available year round, but the holidays and testing for the kids are a perfect excuse.

With the big sales this weekend, it was a good time to see some in person at the stores.

Kicking it off with Griffin Tech’s HELO TC Helicopter. This is a twin rotor ‘RC’ indoor helicopter toy. We have several that have made their way down the hall. The controls are via a iPad/iPhone app that has on-screen touch controls, but can also be controlled by tipping the iPad to steer. While cool, the tipping has proven rather difficult in tight areas. The software will remember three flights so when you get a successful pass through the obstacles you can look good in a crowd later. There are several REALLY bright LED lights on the helicopter that are controlled through the iPad. The actual connection between the iPad and helicopter is via a IR adapter that plugs into the iPad audio out. Priced at $50, it falls in the mid range indoor helicopter options with a nice twist to use the iPad as the controller.

Brookstone has a few options, non of which we got to play with in the store but all where in stock.

Rover App-Controlled Spy Tank with Night Vision – One serious little tank has a camera, a microphone and works on it’s own Wifi network. The camera… controlled with the iPad app, viewing streaming video and able to snap stills as it goes. The microphone lets you hear what is going on where the tank is with the iPad in your hands. And, the Wifi controlling between the iPad and the Spy Tank is through a Wifi network set up on the tank so there is no issues trying to use a local Wifi network when you play with it at home then at the office. At $150, the Spy Tank is a bit more than most iPad based toys but it has a lot of features that add up to that price quickly. 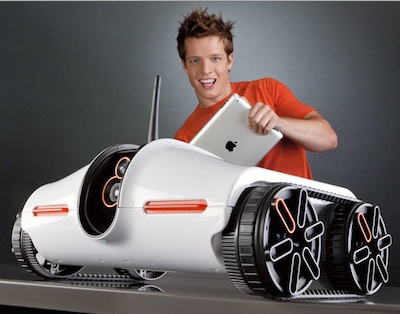 Brookstone Tankbots – is all the way the other direction from the two above, a very simple little fun car that can be driven about through an app on the iPad. Lights for eyes can be controlled along with the Tankbots movements. Get two going and they can shoot IR at each other with a notification when one gets ‘hit’. A lot of fun but you will need something else to do if you give them to the kids during their 40 minute charge time. The Tankbots charge through a flip out USB, a full charge is good for 15 minutes of play. Three colors available, each for $25. 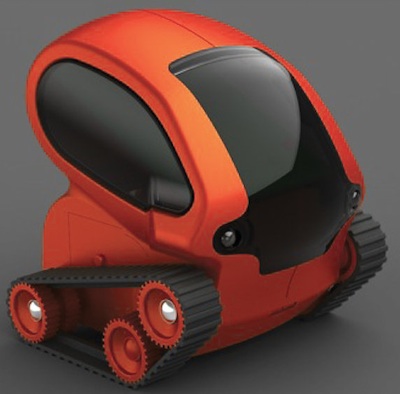 Finally, the Brookstone Parrot AR.Drone quadricopter. This is one serious ‘toy’. Like the Brookstone ‘Tank’, the Parrot is controlled by your iPad via it’s own Wifi network. It also has cameras to view on the iPad, one pointed to the front and one down. So, fly around and land in a room that your not in, or when outside around the corner of the house. To make everything work, the Parrot has a serious onboard system to keep the copter stabilized so your not spending all your time trying to keep the four rotors flying flat and forward. 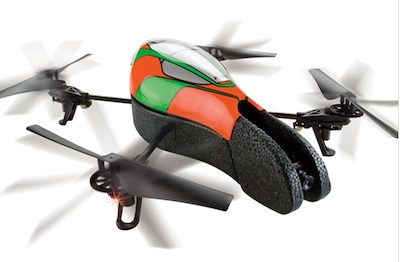 This might not be a view of the Parrot you recognize. Normally when we saw this copter in catalogs, it had it’s indoor rotor protection on. Smart, we feel better about not dinging the walls in the next room when we aren’t there to see how close we are flying to things. The ‘toy’ is currently priced at $280. 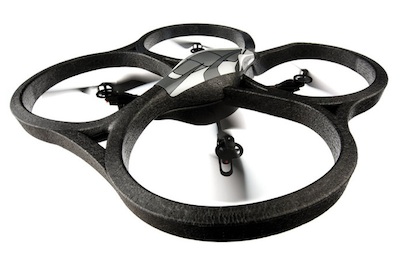