For the Monty Python fans amongst our readers. There was a skit where a couple walks into a restaurant and started off by ordering conversation cards. The cards where just a list of facts they read to each other… it’s didn’t end well.

This isn’t the way things go with TableTopics on your iPad. We covered a very robust version over a year ago, but today we thought you might like to know about a lighter ‘Holiday’ version. The app comes with cards in two groups, Holidays with the In-Laws and New Year’s Eve 2012.

Unlike the Monty Python skit, the TableTopics cards are not just a list of facts. They cover a variety of subjects with text specifically designed to encourage a conversation. The idea is that as a group around the iPad, a card can be read and folks comment on the subject from their perspective. Things like: “Have you ever spent the holidays away from your family” and “Name three of your favorite pies”. In the process of answering, others feel they can comment on each other’s view and this is what we call a ‘conversation’. 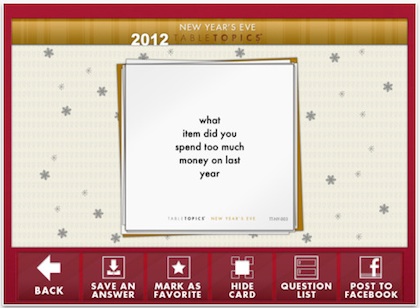 All kidding aside, we have played with the larger version throughout the year with pretty good experiences. If you don’t want to gather around the iPad, TableTopics Seasons can be run on your iPhone too. That way you can come up with conversation starters in the room when things start to slow down. No one needs to know you had a bit of help.