For some folks, it was Grandma’s big round globe, for others it was Mom and Dad’s. Either way, when we see those old world maps wrapped around a orb at weekend antique fairs, they are always already in someone’s hands. The joy of the world like we would see it from space if there was huge signs saying what country and major cities where. Look how tiny that country is… see how many major towns in that one. Some of the ‘newer’ globes even had typography so we could reach out and touch the highest mountain ranges.

The TouchPress folks (Wolfram Alpha) must have enjoyed that fun as kids as much as us because they spent a year putting together a iPad version of those world balls. It took a year because it is now fully interactive. Where yesteryear we had to fill in a lot of blanks in our creative minds, now the creative minds at TouchPress is telling us what we always wanted to know. 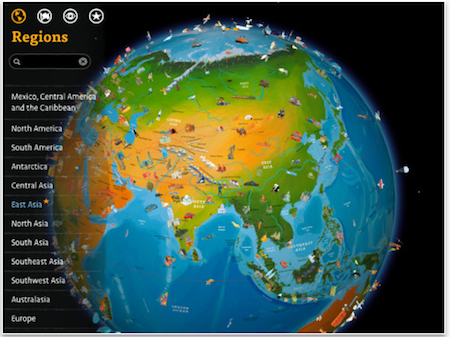 The 3D globe is called Barefoot World Atlas… and it is so much more than a basketball sized paper ball globe we played with. Still with the spinning action everyone loves to do, but now you can zoom in and out like your flying over the surface of the world. Since Wolfram Alpha is involved, there is real time information available… world weather at your finger tips!

• globe navigation by regions, emphasising the way people have been shaped by the characteristics and resources of the land
• hundreds of animated illustrations by artist David Dean representing culture, people, and nature
• extensive written text and spoken narration by BBC presenter and geographer Nick Crane. 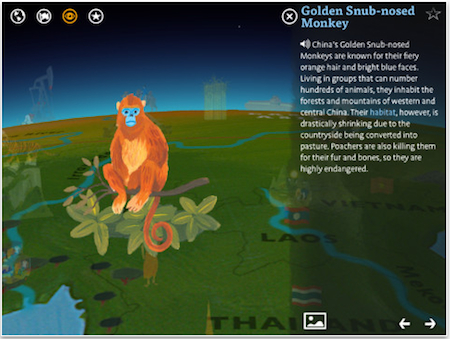 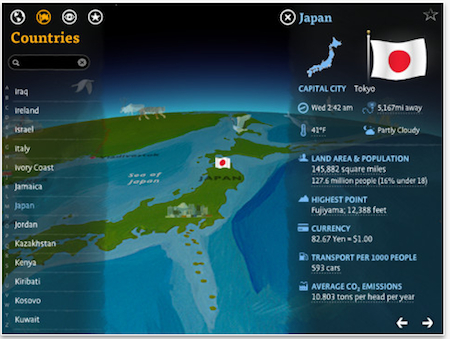 We would love to say this is an app you must buy for your kids… but we have to be honest that they will have to fight us for the iPad as we get our own questions answered with the help of the TouchPress interactive Atlas app.