Another iPad Stylus has made it’s way to the office for testing during our work day. The stylus, Pogo Connect, needs a battery since it has Bluetooth to tell the iPad how hard your pressing as you write and draw. The tip is closer to a regular stylus round rubber than the other pressure sensitive stylus options we have played with.

Balance is nice, writing tip doesn’t squish too much, the size of the stylus is very comfortable, and the button has indicator lights so we know when things are working. Connecting the Pogo Connect to the iPad’s Bluetooth is not done through the Settings app. Instead, each app is told to look for the stylus independently. The list of supported apps is covering most of the big names in drawing and writing apps, see the list on Pogo’s site. Once app ‘sees’ the pen via Bluetooth, the app can respond to the level of pressure applied between the stylus and iPad. 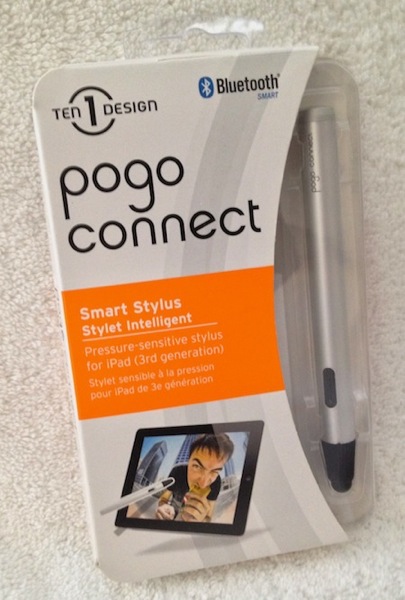 The system is pretty efficient, allowing a single AAA battery to last longer than most of the rechargeable options. The tip has a fun feature, remove/replace just it quickly, being held on with a small magnet.

For apps, there is even one that will locate the stylus with a ‘radar’ like screen. We found we just left the pen on all the time since it connected to an app on it’s own upon launch where the app had previously been told about it.

Like we mentioned above, the stylus feels comfortable in the hand. Some of us had issues with holding right where the on/off button causing occasional power downs happening… again, lucky the re-connect is quick. The only real negative is that we are finding it difficult to find pressure sensitive interaction with app being needed. The app, Paper by 53, supports the Pogo Connect. But, the app also supports line thickness based on speed of the drawing instrument so we didn’t find it did anything more than we had. What we would love to have is the button being programmable. Some of the electronic styluses allow the button to be a ‘undo’, we would prefer it was able to bring up a drawing app’s color picker.