For files that are not high level corporate security, Dropbox has become a very popular way to store files for either access for the iPad and to move documents to the iPad. Many apps now come with Dropbox integration build in directly. Documents To Go and GoodReader both allow direct integration of document storage through Dropbox (and other cloud providers).

Dropbox themselves has long had a iPhone app that has proven a great way to get pictures taken with the iPhone through the cloud to other devices. Much faster than doing a sync or emailing a image at a time.

There is now a iPad version of Dropbox available! It does a nice job of using the available screen area for clear viewing of available folders, files and documents. Currently, there doesn’t appear to be any way to create new folders in the Dropbox cloud via the app. And, the uploading of files is limited to photos and videos.

Selecting any files on your Dropbox location will download it and viewed on the iPad screen. From the document view, a link to the file on Dropbox can be shared out in an email. Also, the ability move the file to other readers is available much like the built in Mail app. 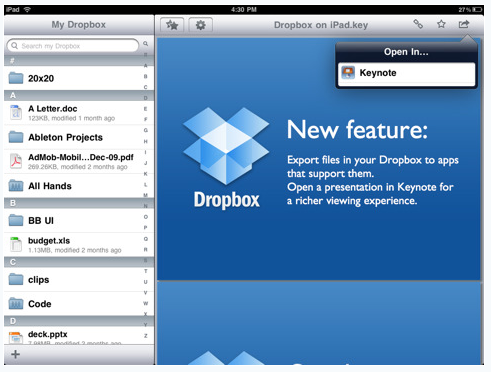 A couple negatives have hit us pretty quickly… they many not matter to you so your level of excitement will vary. You are downloading one file to view, there is no storage within the Dropbox app so if you select another document it pushes out the previous viewed. The document on the screen wont go away till you replace it with another. And when you send a document to another reader application (one way to store the documents), the document looses it’s name… being replaced with a long number.

This is the first release of a free Dropbox iPad version so we will take a few negatives. knowing things get better as more users give positive feedback. It’s nice to have the full screen clear reader for our Dropbox stored reference files for a quick look.